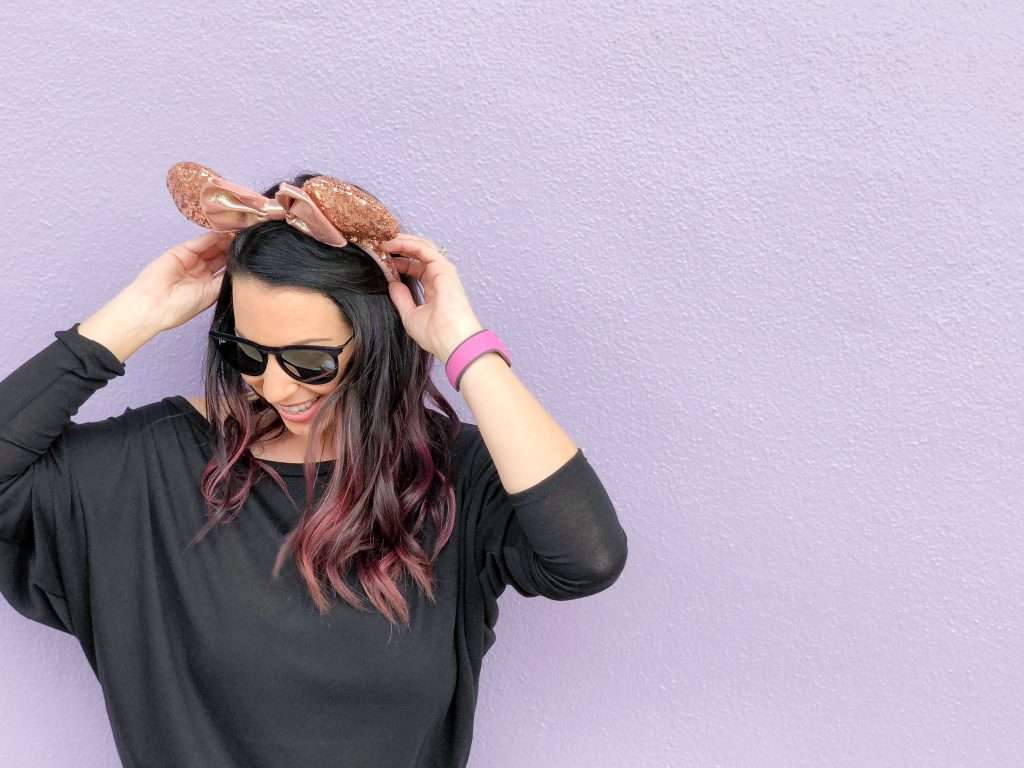 It’s no secret that I’m a total Disney fangirl. I’m pretty sure I only visited Disney a couple of times as a child which led to me being slightly obsessed as an adult (you know, making up for lost time 😉). Living less than 90 minutes away, it’s not uncommon for my hubby and me to drive over for an afternoon in a park and then come home. But back in February, I planned our biggest single day at Disney – all 4 parks in 1 day.I know this “challenge” is nothing new, but I had never really had a desire to do it until I started getting questions from travelers asking about tips for visiting all 4 parks in 1 day. (Ok, like 2 people asked, but it got me thinking and I wanted to try it out!)

I had a loose plan for our day, but overall, I wanted to be flexible. It was all trial and error for us and I definitely learned a lot. I’ve also learned that if my schedule is too strict at Disney, I get too wrapped up in where I’m “supposed” to be instead of enjoying the moments!

So What Order Should You Visit The Parks?

Ok, here’s the deal. Leaving Magic Kingdom at closing time (usually right after the fireworks) gives me so much anxiety. The massive amount of people all trying to leave at one time is so overwhelming and people get mean. As I planned out the day, I knew we’d have more time in our day if we visited Magic Kingdom last (closing at 10:00pm), but I chose to flip-flop the schedule. We did 4 parks in 1 day with just 11 hours.

Many people will suggest you visit whatever park has the “extra magic hours” in the morning. However, those extra 60 minutes are only available to visitors staying on property. Because we drove over from the Daytona Beach area, we didn’t have this option.

If you reverse the schedule we followed, you’ll typically add a total of 2 hours to your day. That’s an extra 30 minutes in each park, and yes, that could totally be worth the chaos of Magic Kingdom at closing.

I totally recommend Magic Kingdom to be your first or last stop of the day. We visited Magic Kingdom first and it wasn’t half as crowded as nighttime usually is for us. To me, it’s worth skipping the fireworks, but if you’ve never seen Happily Ever After and it’s part of your Disney Bucket List, I get it!

We arrived in the parking lot at 8:55am (park opened at 9:00am). I knew right away that we were behind on time. We ditched our backpack and carried in our phones and wallets. This allowed us to skip the long bag check line and go straight through security.

From the parking lot to the security line to the ferry to the entrance, it took us a solid 35 minutes.

We caught the end of a little parade on Main Street USA and then our stomachs started growling. We avoided the wrap-around line at Starbucks and headed to Sleepy Hollow near Liberty Square for a sweet and spicy chicken waffle. SO. GOOD. We split one and it was enough to fill us both up.

For the 2.5 hours I planned out in Magic Kingdom, we hit up our three fast passes and had a mid-morning snack – Dole Whip. It was my first time we ever tried the infamous Dole Whip and it definitely lived up to expectations. 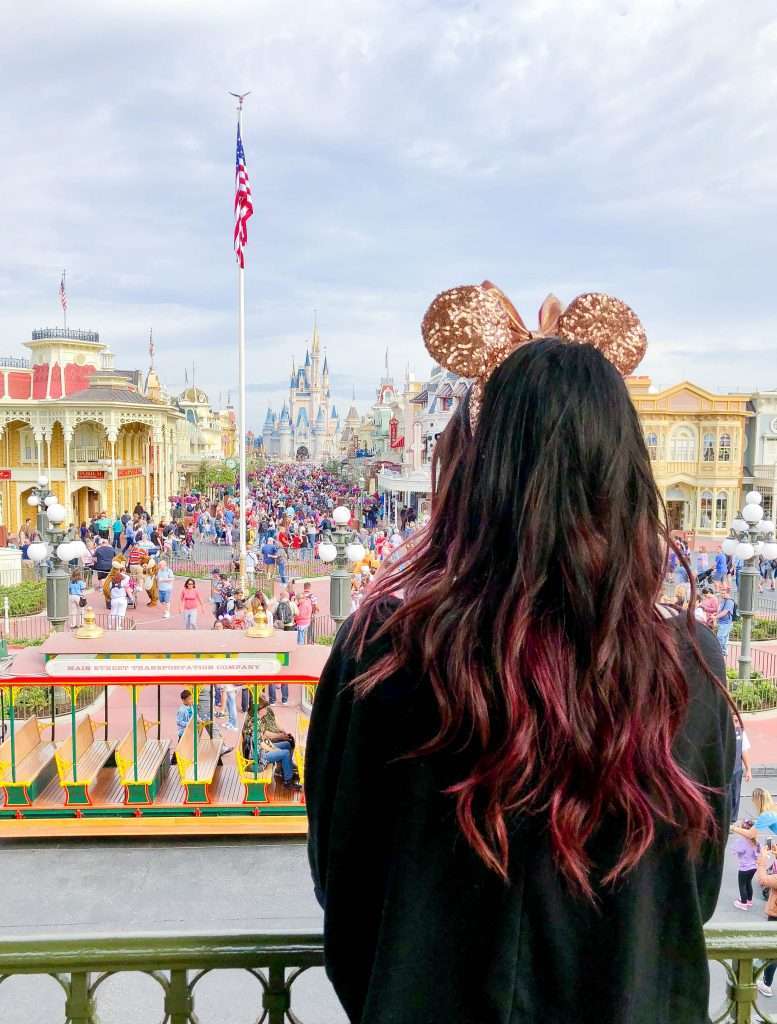 Getting from the Magic Kingdom exit to the Epcot entrance took us exactly 48 minutes. That’s a lot of travel time, ya’ll. Festival of the Arts was happening and we skipped out on fast passes to walk around the world, paint our part in the mural, and try out some of the foods. Typically, we love to drink around the world, but we knew we had a long day ahead of us. We sipped on one beer together, but stuck to water the rest of the time so our energy could stay up!

Some of the rides you can expect to be available for last-minute fast passes include: Living with the Land, Turtle Talk with Crush, and maybe The Seas with Nemo and Friends.

Because we didn’t need fast passes at Epcot, I skipped on over to Hollywood Studios on the Disney Experience App and got lucky with a great ride! 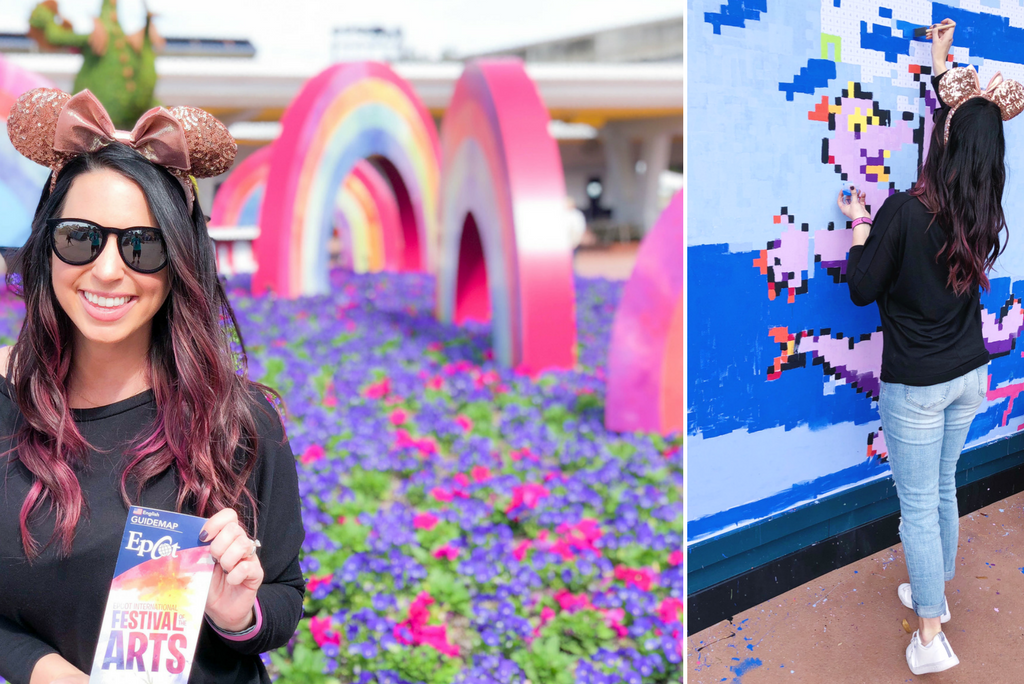 We love the rides at Hollywood Studios and I would go as far to say that Toy Story Mania is my all-time favorite. Unfortunately, I wasn’t able to get a fast pass for Toy Story and the wait was around 60 minutes. And in my opinion, if you’re doing 4 parks in 1 day then you shouldn’t wait for more than about 20 minutes for a ride. However, I did get Rock n’ Rollercoaster and that was awesome!

Right after Rock n’ Rollercoaster, we took our seats to see Beauty and the Beast- Live on Stage! It’s a Disney classic and I’ve seen this show several times, but I get goosebumps every time! The cast is so talented, they tell the whole story in about 25 minutes, and the costumes are beautiful.

Immediately after that, we headed to see the Frozen Sing-Along Adventure, one of the funniest and best shows in all of Disney World.

We fueled up with a little bit of coffee from Starbucks and headed out around 5:45pm. 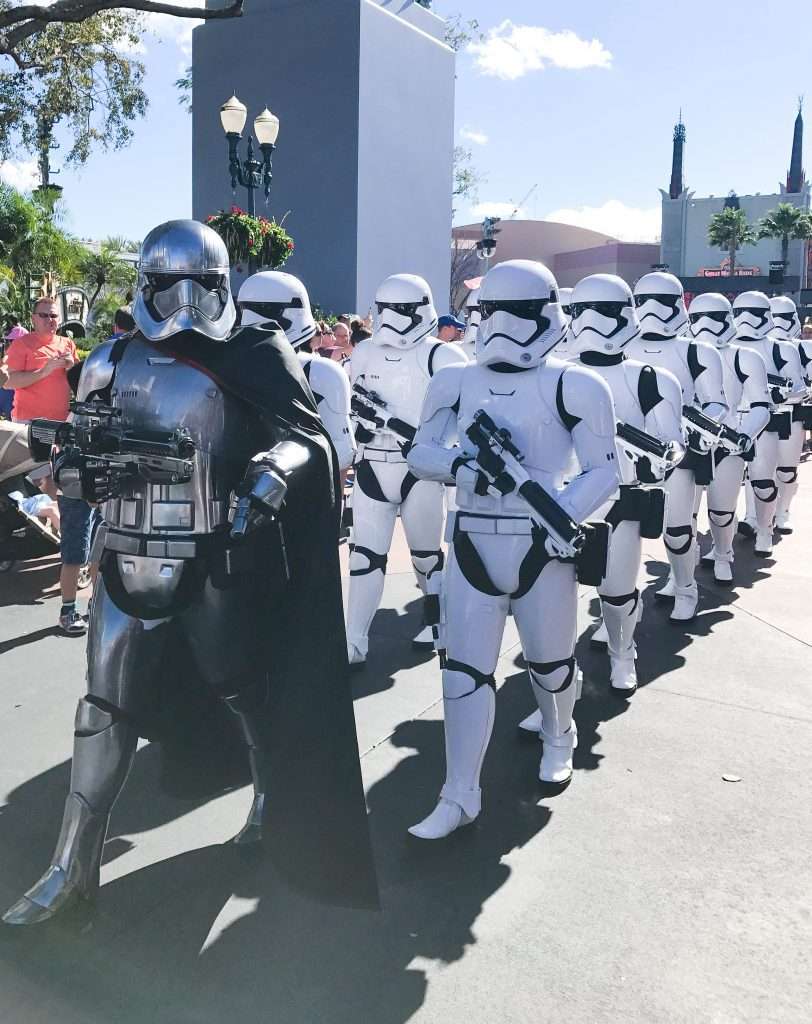 We made this our last stop because it’s one of the less chaotic parks in the evening. The sun was setting, the temperature was cooling off, and we were getting pretty tired. We split a cold beer and went on It’s Tough to be a Bug (5 minute wait). Animal Kingdom doesn’t have a firework show, but we were excited to check out Rivers of Light.

We were kind of disappointed in this show because we had to get there about 40 minutes early for a seat, but then the show was a little underwhelming and only 15 minutes long. I’m glad we saw it, but I would choose to ride Expedition Everest next time instead.

Wrapping up our big day, we wanted to sit and enjoy a real meal. Yak & Yeti is one of the best restaurants at Disney and as Landry members, we don’t have to have reservations! We present our card and they put us at the top of the list to be seated. Animal Kingdom actually closed at 8:00pm, but we were in the restaurant until about 8:30. 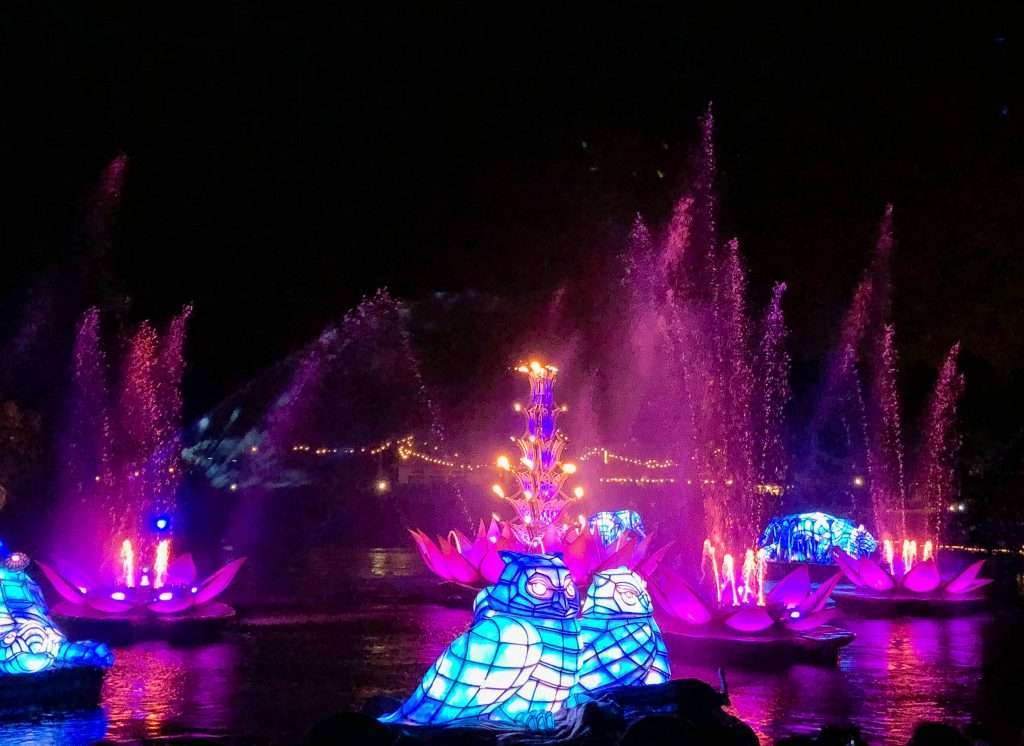 The day was absolutely exhausting but no more exhausting than doing 8-10 hours in just one park. So overall, I think 4 parks in 1 day is doable, just don’t expect to hit the biggest attractions at every park.

Will we ever do it again? Only if we had to. Visiting two parks a day is usually my max and for anyone visiting Disney World for the first time, you could easily spend an entire day in each park. Challenging yourself to 4 parks in 1 day means a lot of rushing around and a ton of time stolen by travel in-between parks.

However, hiting up all 4 parks in 1 day is a challenge that every annual passholder should add to their list. And if you’re brave enough to do it, keep reading for my advice to make the most of your day!

2. Always buy your tickets in advance.

4. Enjoy more than just the rides.

5. Be realistic and choose what is most important to you at each park before getting there.

6. Take advantage of fast passes where you can.

7. The weekends, summer, and other times of the year (like Spring Break or the holidays) feature longer operating hours for every park, but the crowds are heavier.

8. Dress for comfort and don’t forget to bring these 10 items with you.

9. Bring your patience with you. 😉 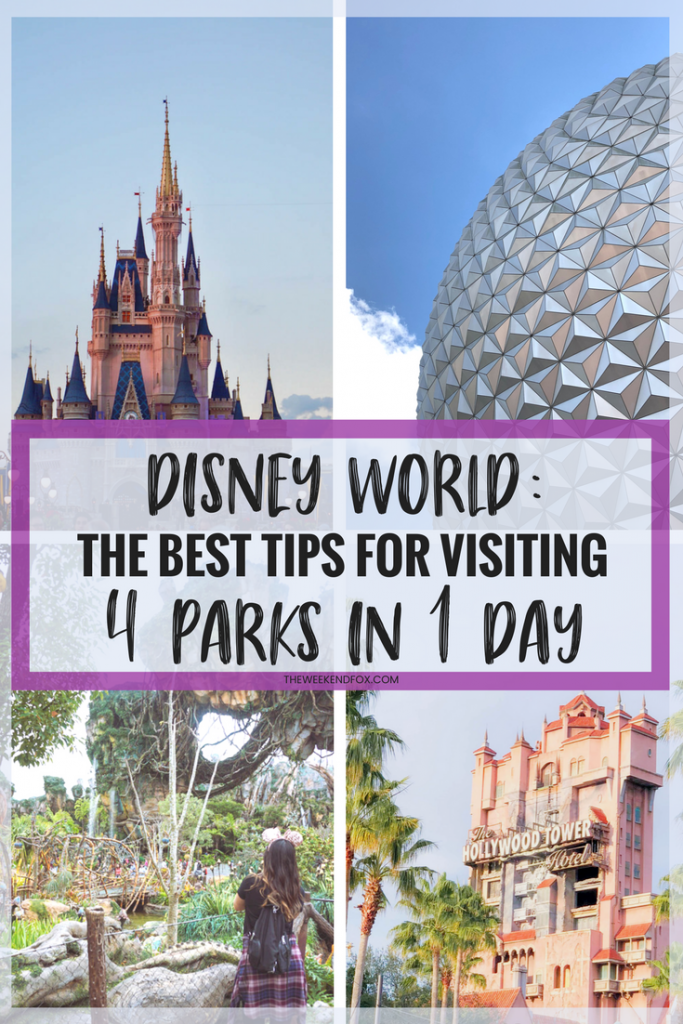 You are a very bright individual!