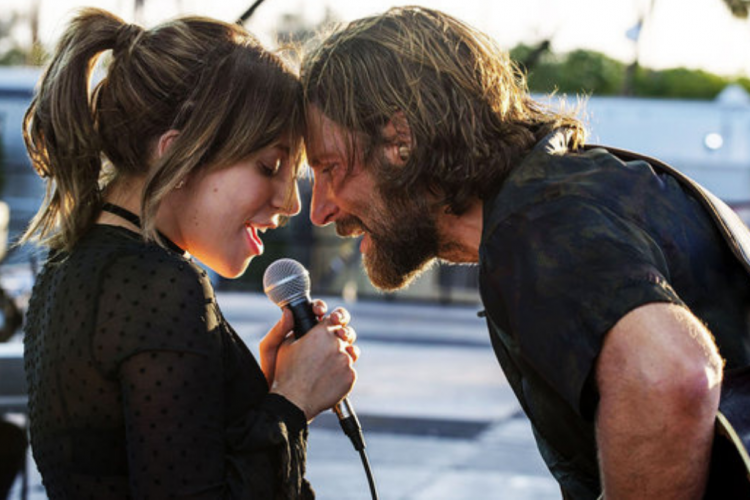 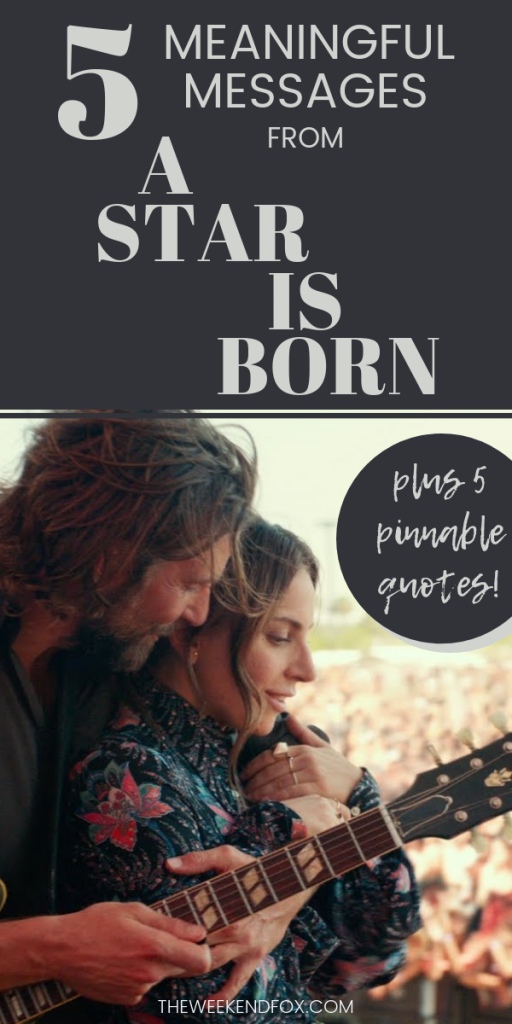 In case you’re wondering, A Star is Born lived up to the hype. I fell hard for the beautiful, yet tragic, love story and I still have the soundtrack on repeat. The whirlwind of two lives coming together in a passionate rollercoaster is what Hollywood movie dreams are made of. The story is raw, the performances are stellar, and the messages throughout the film are paramount.

I’ve been inspired to write about movies in the past. Both The Greatest Showman and Christopher Robin tugged at my heart in a way that allowed my fingers to effortlessly flow on the keyboard. A Star is Born was different. It was an organic and heart-wrenching story with [SPOILER ALERT] a tragic ending, unlike the other two that I’ve written about. I almost didn’t write this post because sometimes I have a hard time putting my feelings into words. I was afraid I wouldn’t be able to do it justice or that nobody would care what I have to say, but I’d be ignoring some of the most important messages if I let fear take away my voice. So, here it is.

In case you’ve been under a rock or want to watch it for the 700th time, here’s the movie trailer that still gives me goosebumps.

I was as impressed with Bradley Cooper’s singing as I was with Lady Gaga’s acting. You could tell they both settled into this different form of art that suits them so well. Cooper’s version of the story is all about two talented people peeling back the multiple layers of each other as they fall in love and battle the pain of fame and addiction. I have to admit that this probably wouldn’t be a success story without the fame of the characters. Maybe the world is a little obsessed with watching the downward spiral of those who seem to “have it all”.

Tell me somethin' girl. Are you happy in this modern world? #Shallow #AStarIsBornClick To Tweet

5 Meaningful Messages from A Star is Born

Whether you’ve seen the movie or not, these messages might just resonate with you, too. I’ve tried not to throw in too many spoilers, just in case.

Message#1: Your eyes can say everything.

In the film, it takes one delicate gaze at each other and the chemistry is ignited between the two. Bradley Cooper made the movie focus on the two of them as humans going through the motions and struggles of life as superstars. But instead of viewing them from an outsider’s point, like a fan or manager, the close shots hold you tight to each character, allowing them to feel more human than superstar.

The subtle reactions of Jackson’s icy-blue eyes as he looks at Ally’s face is captivating. I’ve always been a fan of Lady Gaga, but seeing her as an actor made me love her even more. The chemistry between the two was undeniable when the camera caught the honesty behind every look. It spoke so much about the relationship from the beginning to the end. It reminded me that so much can be said with so few words. The eyes can truly feel like windows to the soul. 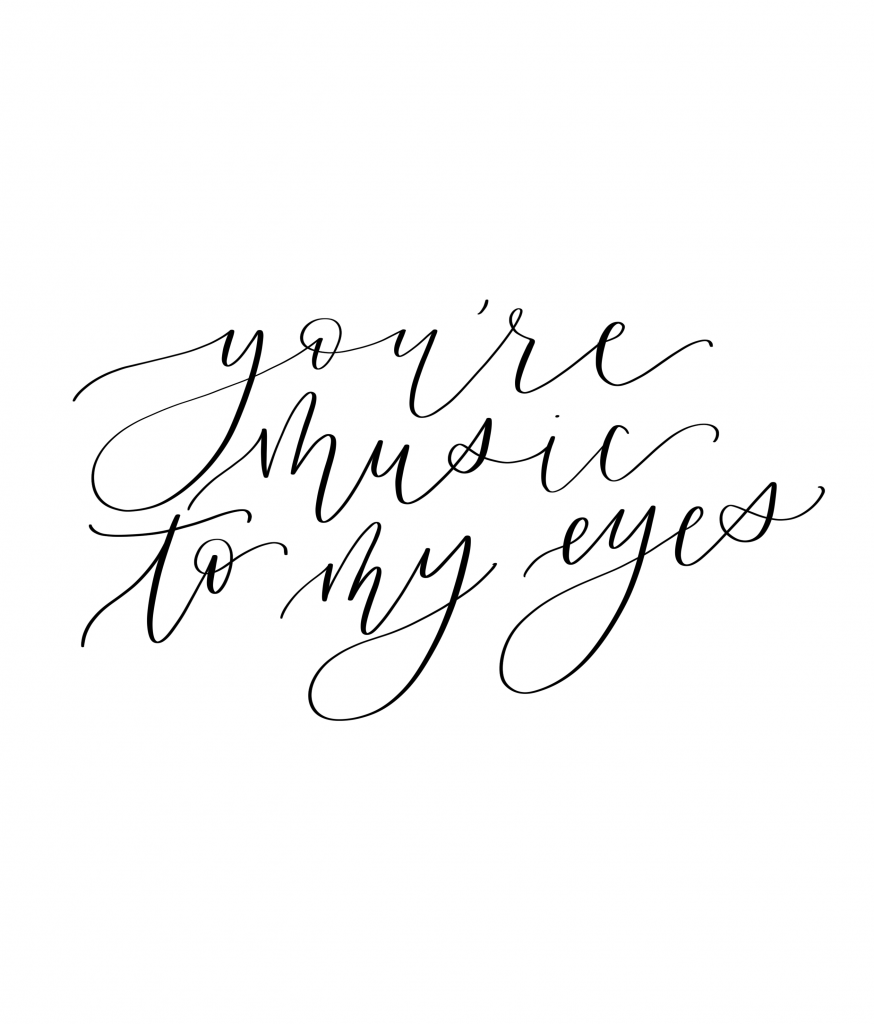 The handwritten calligraphy in this post was created by my sweet friend, Sarah. See more of her work on Instagram: @therelatablecreatable

Jackson Maine says to Ally multiple times in the film, “All you gotta do is trust me“. The story is all about trusting your gut, going with what feels right, and not overthinking every little thing. From Ally quitting her job to walking on stage with Jackson, she’s following her instinct, even when she’s terrified. Sometimes, the risk is just allowing yourself to put trust in someone else. Sometimes, your gut is what allows you to trust that person in the first place. Either way, life is about taking risks and some of the greatest rewards come from throwing away everything that feels safe.

This message isn’t just in the movie, it’s a part of the production, too. This film was created because Bradley Cooper took a risk and Lady Gaga took a risk. They trusted their gut to bring a story to life that’s compelling and meaningful, even though it’s been done before. Cooper took vocal lessons and learned to play the guitar while Lady Gaga stripped away her infamous look to bring something to the table that she had never done before. They poured their heart and soul into something they believed in. Maybe we all could do that a little more. 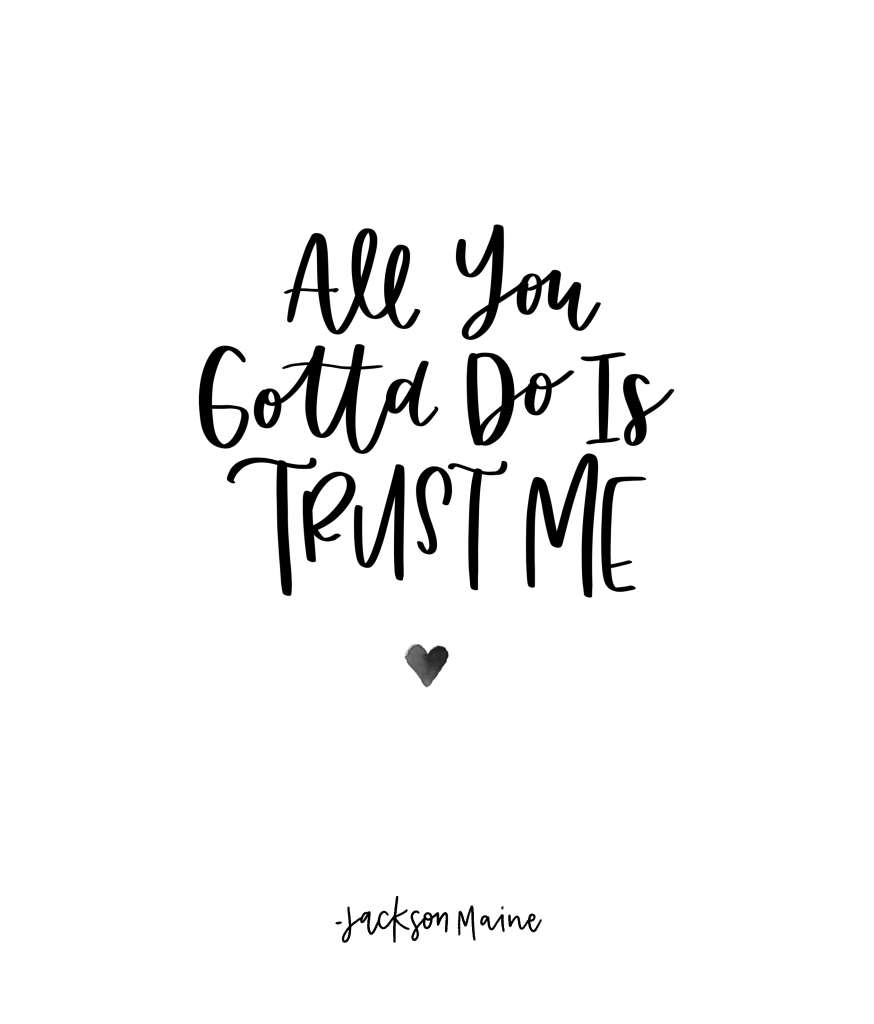 Message#3: Music is a powerful story.

At the end of the day, this was a musical film and one of the most powerful parts of the film is that all the music was performed live. Every song is original, making the music a character of its own in the movie. Without the beauty of octaves, instruments, and passion behind the lyrics, music is just a sound. This film gives every song so much power and places them in a specific order to guide the audience through the journey. Some might even say the script in between the songs weren’t even necessary to tell the story. That’s powerful. 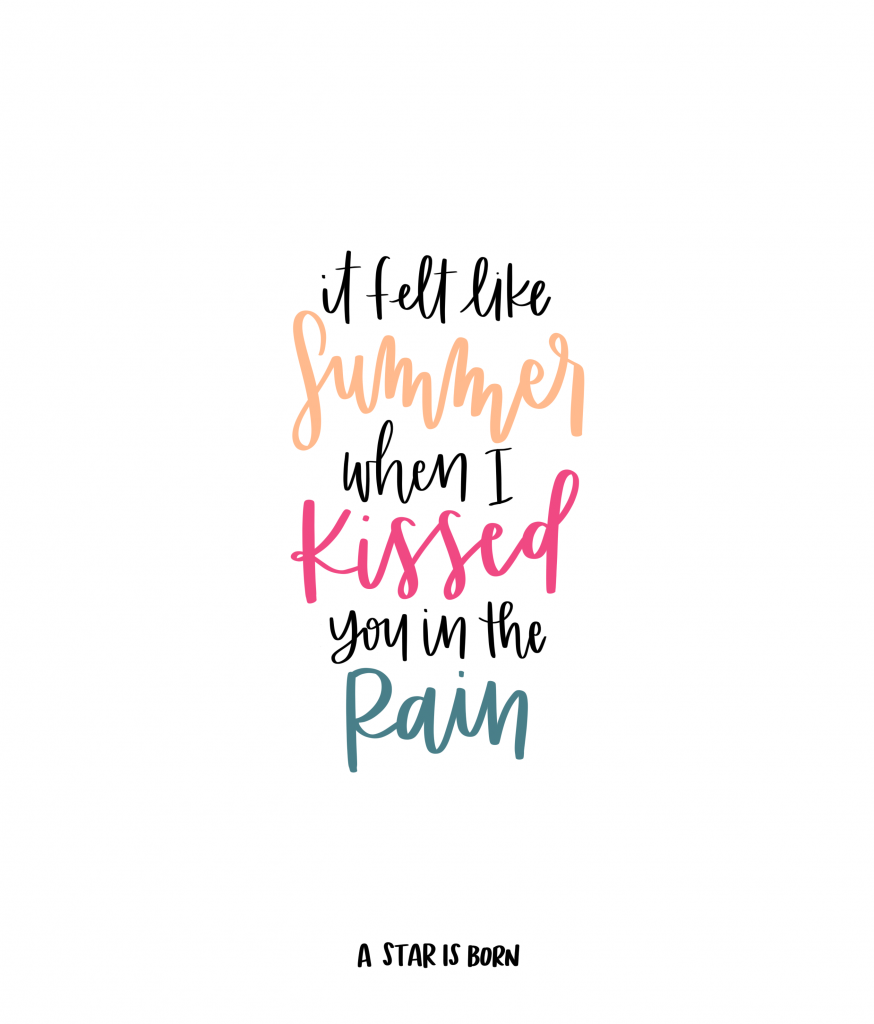 Message#4: Be your truest self.

“All you’ve got is you and what you have to say to people.” Jackson Maine reiterates this statement to Ally multiple times in the film. From the very beginning to the pinnacle of Ally’s success, Jack wants her to be who she is deep inside. In fact, it’s not Ally’s stardom that Jackson grows to resent, it’s the fact that she’s not staying true to herself.

Your voice, especially in today’s world, is one of the most important things you have to give. You should never be silenced, never be scared to contribute to the conversation, and never be intimidated to stay true to yourself. You will always be too much of something for one person and not enough for someone else.

The world will always have an opinion and there will be people trying to change you. And as hard as it may be, be your truest self.

Every version of A Star is Born follows a similar story: the famous rockstar boosts the career of a girl he falls for, only to see his own life spiral down into darkness as he battles his addiction. Is this where the fine line between fiction and reality comes into play? This is the third remake of A Star is Born and maybe it’s because we’re all still trying to figure out how to avoid the endless cycle of self-sabotage from addiction and the daily struggle of mental illness. The on-going pain of Cooper’s character was excruciating to watch. It was painful to see those around him accepting and enabling his addiction. And the worst part of it all is that it’s happening all around us in the real world.

This is something that needs to continue in storylines. Talking about addiction and mental illness shouldn’t be taboo. Getting help should never be seen as a weakness. It takes strength to look in the mirror and know that help is needed. It also takes strength to offer help to those that need it most. We all play a role in the world of addiction and mental illness, and it shouldn’t be ignored.

I don’t care who you are or what you do, there are some battles that cannot be fought alone.

What are your thoughts?

I knew A Star is Born was going to be filled with a lot of emotion, but I wasn’t expecting it to leave the impact on me that it did. I think it’s Oscar-worthy in so many ways. If you’ve seen it already, what did you think?! What did you take away from the story and how did it all make you feel? If you’ve seen the previous versions of A Star is Born, how did this one compare? I’d love to hear your thoughts on it all! 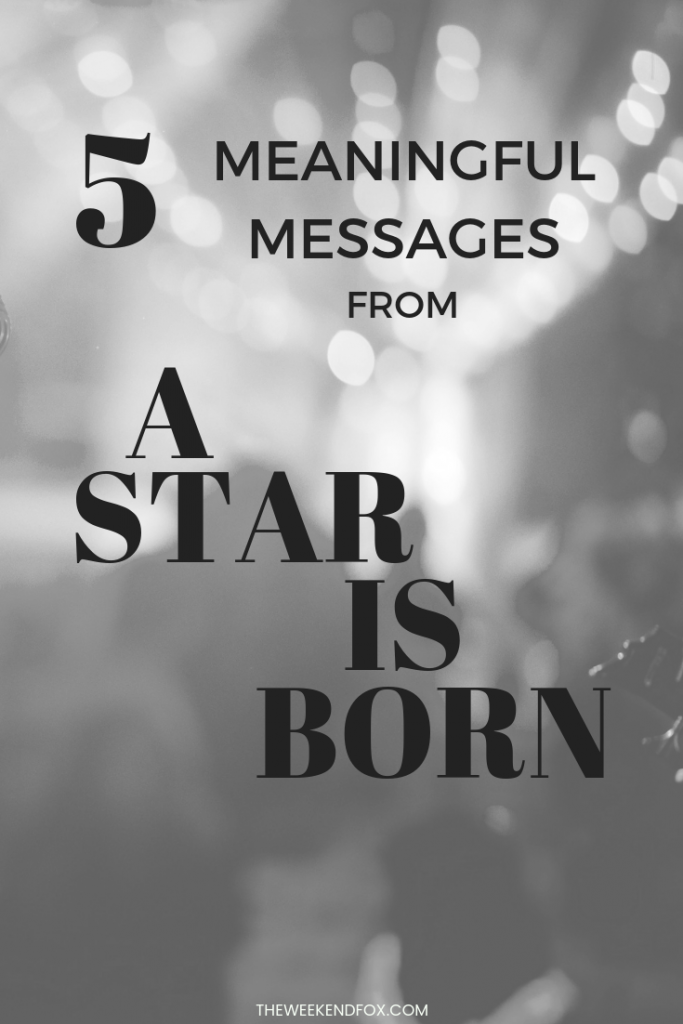 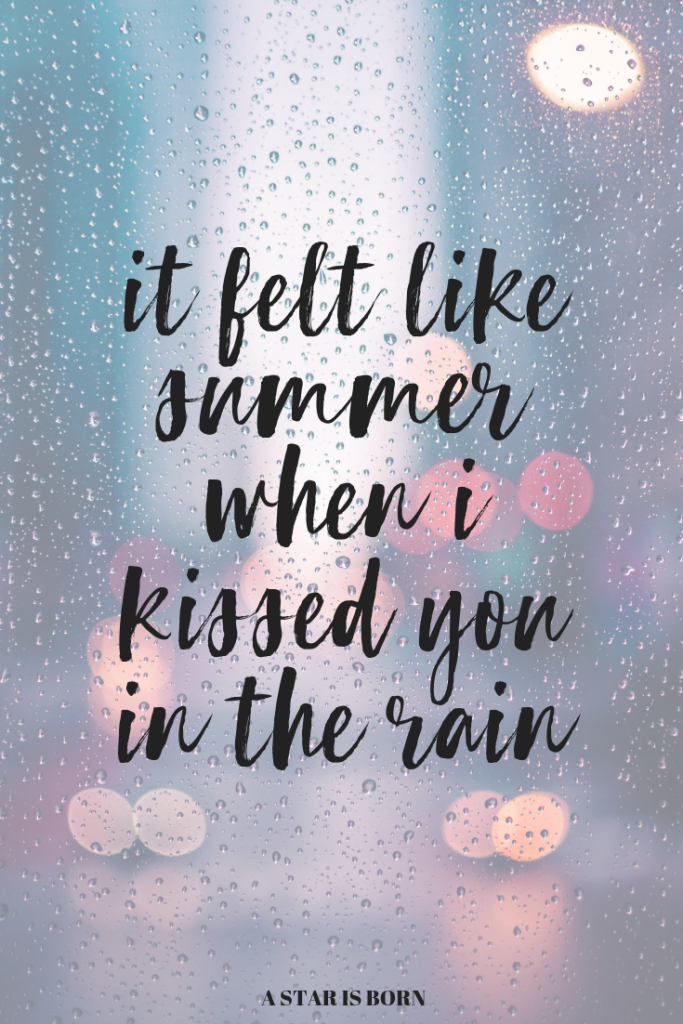 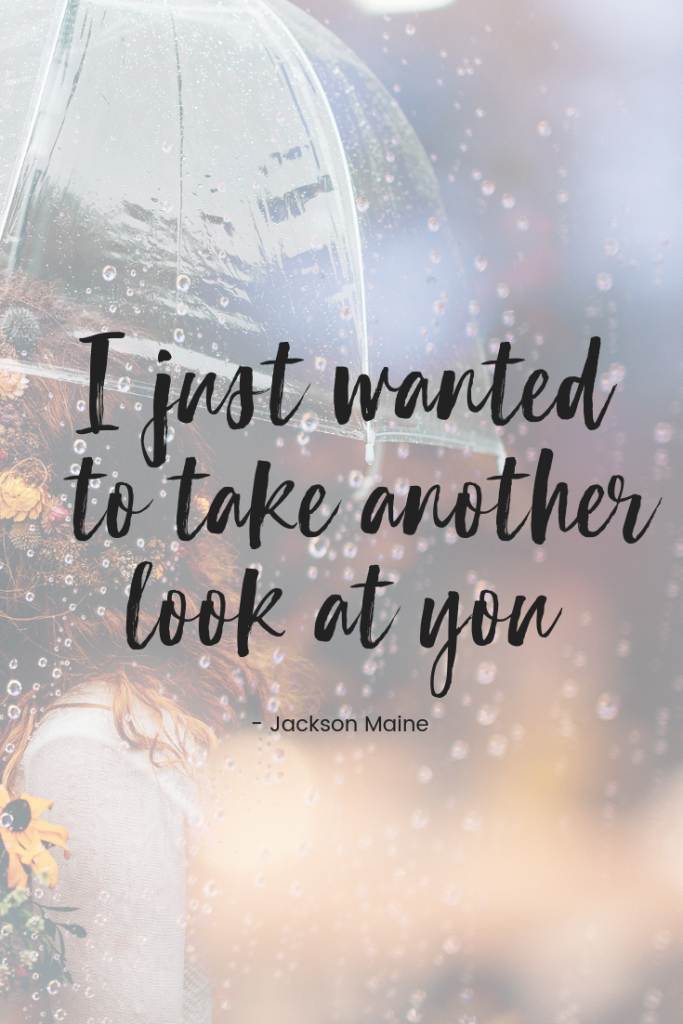 What a beautiful review! You really did the movie justice (yes, I’ve seen it… and it’s as powerful as you say!)

These messages you highlighted are fantastic… and I agree with them all. Especially that we need to be more vocal about addiction and mental illness.

yesterday i saw a Star is Born for the first time. And of course I had to read a lot about that masterpiece afterwards. So i also read your article about 5 meaningful messages from a Star is Born.

I wanted to say thank you for that great article. Very fitting. From the beginning of their first met until the end the whole time a latent real bad feeling accompanied me and that was about his mental health and addiction. As someone who has experiences with that i thought the whole time, when is he going for professional help. But he didn't.

It doesn't matter how beautiful something is and what happens to you, unless you are not mental healthy nothing can resk you.

A very powerful message figured out perfectly. Thank you very much for that and the whole article of course.

Wish you all the best