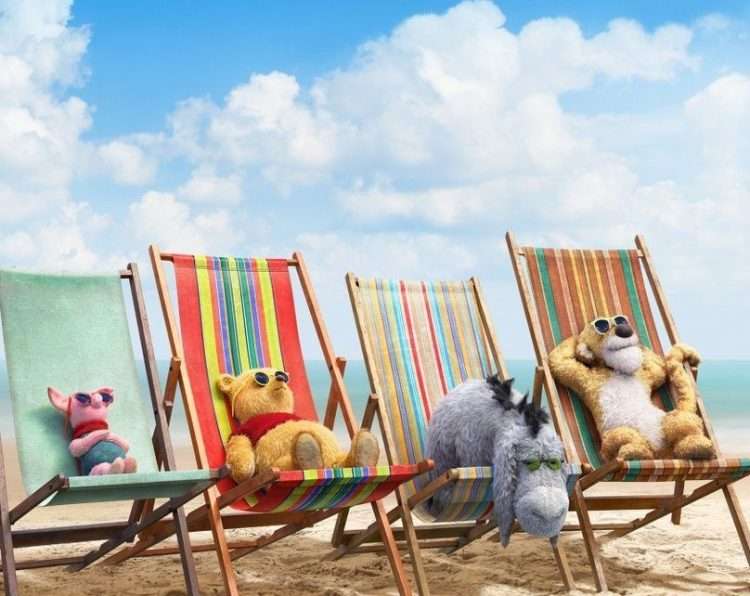 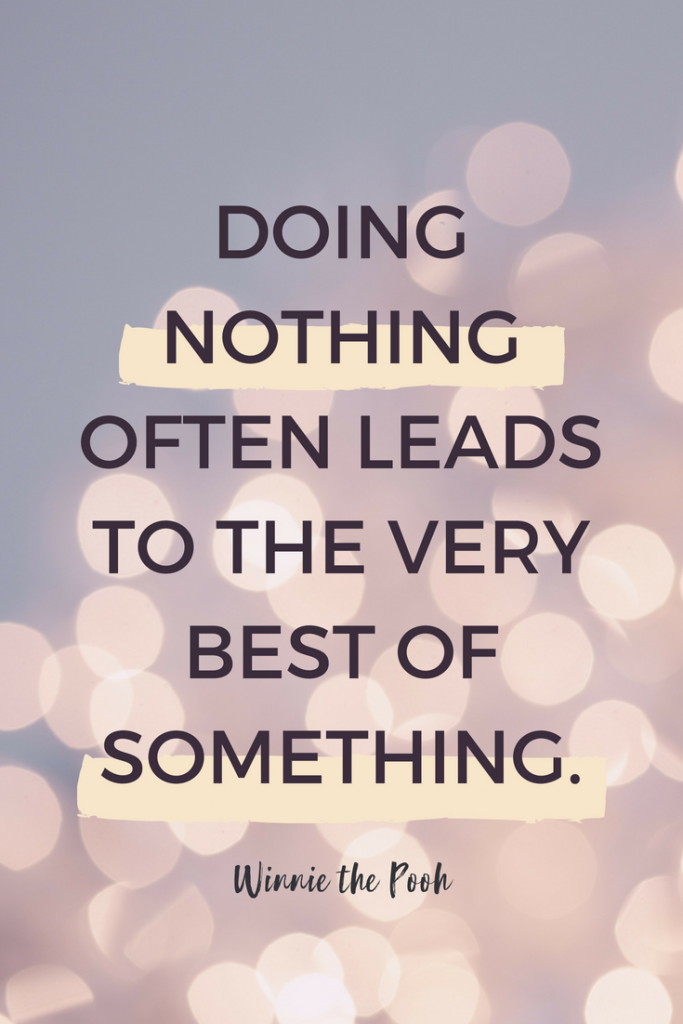 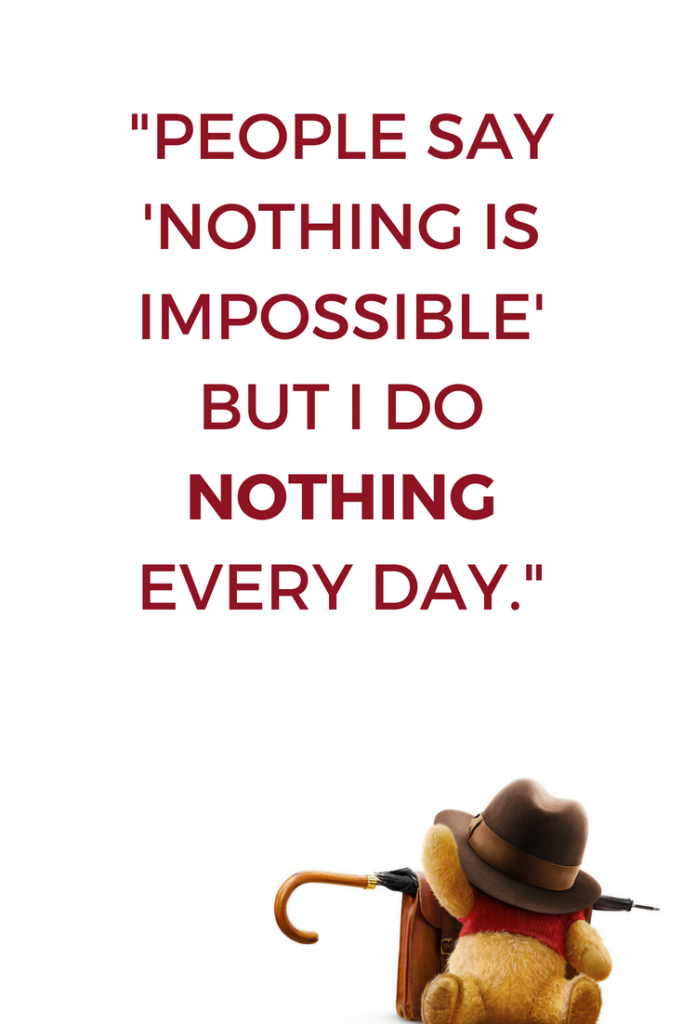 The moment I saw the movie trailer for Christopher Robin, I knew I needed to see it. The nostalgia of Winnie the Pooh’s voice to the humor of Eeyore’s doom and gloom comments tugged at my heart and carried me down memory lane.

I had high expectations for a simple and sweet story with some thoughtful life lessons. And in true Pooh fashion, that’s exactly what I got. I don’t remember all the specifics of Winnie the Pooh stories from when I was a child, but I’ve carried some of Pooh’s quotes with me through all seasons of life. Seeing Pooh on the big screen was like spending time with an old friend and I instantly felt inspired to write about the quotes from Christopher Robin.

One of my favorite Pooh quotes:


Sometimes the smallest things take up the most room in your heart. - Winnie the PoohClick To Tweet

The film’s beginning starts with the background of young Christopher Robin playing with his friends in Hundred Acre Wood. Flipping through the timeline by turning pages in a book, the audience sees the progression of Christopher Robin’s life. From saying goodbye to Pooh all the way through him going to war and meeting his wife, Evelyn, you see him become the adult he is today.

However, he seems to have lost the joy of everyday life. Robin’s demanding job and work ethic causes strain on his family when he must miss another weekend at the cottage to stay back and work. When their young daughter, Madeline, finds a box with a drawing of Pooh and friends, she leaves it behind with a note to her father before going to the cottage. And that’s when Winnie the Pooh arrives just in time to help Christopher Robin rediscover his inner child.

With that said, these 9 quotes from Christopher Robin are just as charming as the silly ol’ bear himself.

Love this post!? Be sure to check out 15 Quotes from Mary Poppins Returns!

“Doing nothing often leads to the very best of something.” – Pooh

This is the main plotline throughout the entire film. I don’t think this message is a coincidence in 2018. I believe Pooh came back to our screens to teach us more. While some might think that it is overused or repetitive, I believe that’s part of the message. In a world where it’s praised to work longer and harder, it’s easy to forget the importance of doing absolutely nothing.

I feel there’s magic that happens when you do nothing. The body refreshes, the mind can relax, and some of the greatest ideas can unfold while doing nothing. 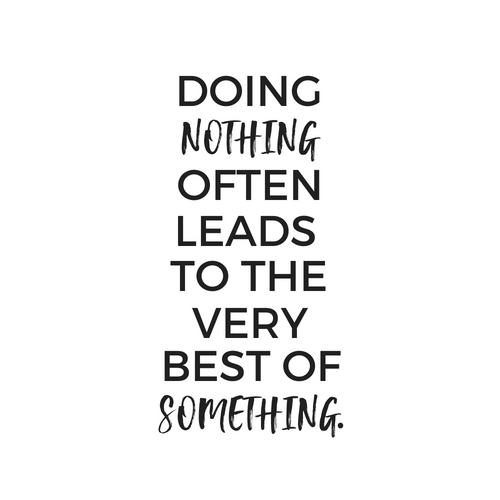 “Your life is happening right now in front of you.” – Evelyn

It seems like almost all of my favorite movies have memorable lessons from the spouse. After all, the main characters are usually too stuck in their own little world to see it from a different perspective.

This quote comes when Evelyn is visually upset that Christopher Robin shows up at the cottage only to announce he must leave immediately. The strange arrival causes more heartache and confusion for their daughter. While Christopher tries to explain that work is very important for their future life together, Evelyn reminds him that life is happening now. Isn’t it funny how we can focus so much on the great future we’re building that we forget to love our life right now? 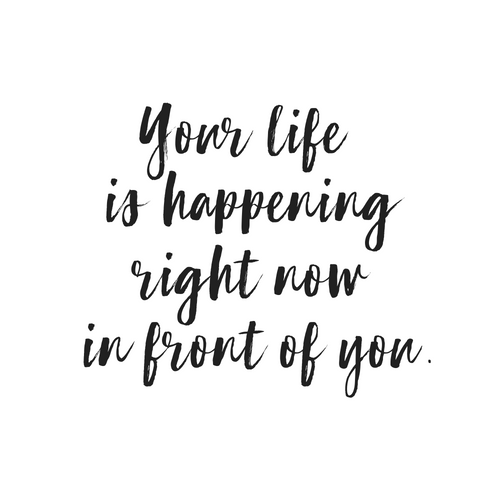 “I suppose it’s right where it needs to be.” – Pooh

This quote really stuck with me. Even though Winnie the Pooh is referring to the tree that got him from Hundred Acre Wood to London, the “it” in the sentence could literally refer to anything in life. I’m a firm believer in the world playing things out as they are supposed to be.

Life is certainly not always fair, but sometimes “it” is right where it needs to be, even if we don’t understand it at the time. So while Pooh is talking about the tree, I know there was so much more depth in those words. It’s the perfect example of quotes from Christopher Robin being good for the soul. 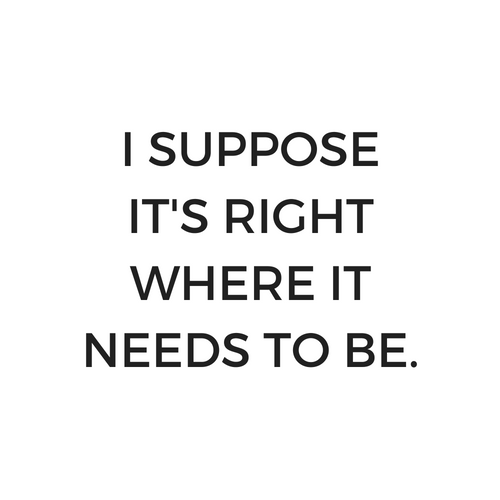 “People say ‘nothing is impossible’, but I do nothing every day.” – Pooh

Another little twist in perspective created one of the most charming quotes in the film. While the average, hard-working, goal-digging, dream-chasing, person would think “Nothing is Impossible” is a powerful and motivating quote, Pooh sees it differently.

This quote digs the underlying message of the film a little deeper and ties in with the first quote. Pooh is clever. He knows that doing nothing IS possible, and it’s totally okay. He is literally living his best life by doing nothing all the time. And, no, I’m not saying you need to stop chasing your dreams to live your best life. I’m saying your perspective can change everything. 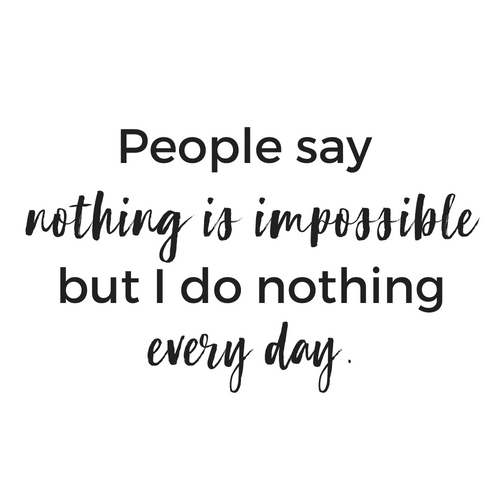 Much like the other quote referring to the tree, this is a statement that can be used for many parts of life. Think about it. There are so many things we want in life that we do not need. But what I loved about this quote is that Pooh is acknowledging that he doesn’t need it, but rather, would like to have it. 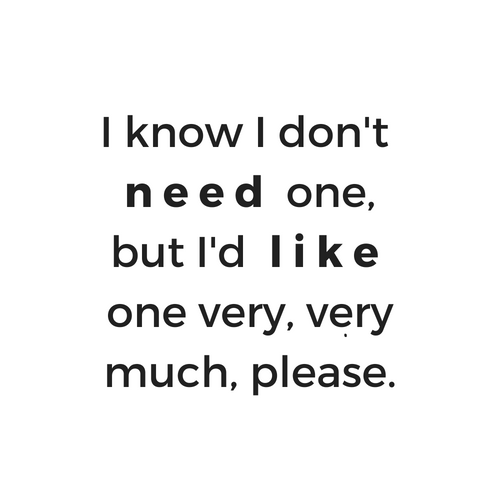 Love these quotes from Christopher Robin?
Check out 8 Quotes to Live By From The Greatest Showman

“Sometimes, when I’m going somewhere, I wait. And then somewhere comes to me.” – Pooh

One of my favorite things about Pooh is his capability of saying the simplest words and turning them into a lesson. Life can feel like it’s going a million miles per hour. We feel accomplished when we are ahead of the game and stressed about the unknown, but Pooh takes life at a slower pace. His patience proves to be one of his greatest qualities and he’s found so much of his wisdom by just letting life happen. I believe many things in life can be answered if we just let it come to us. 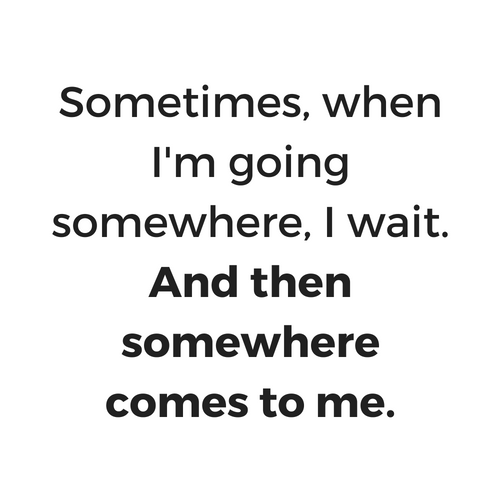 “I always get to where I’m going by walking away from where I have been.” – Pooh

Pooh does it again. His delicate words are simply stating the obvious, but he finds a way to make it so much more than that. To me, this quote was powerful because sometimes you need to go in a different direction in life. If our current story isn’t fulfilling, why would we stay there?

If we’re looking for change or growth, don’t you think we’d need to walk away from some of the things that are holding us back? The path might be unpredictable, but we can get to a new chapter in life by closing an old one. 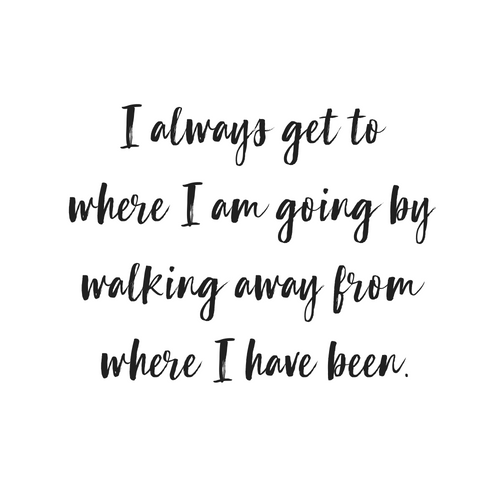 “The most wonderful thing about Tiggers is that I’m the only one.” – Tigger

So many of my favorite quotes from Christopher Robin were spoken by Pooh, but the other characters had their moments, too! Tigger’s adorable, upbeat, and playful personality is a big dose of happiness in the movie. As he’s meeting Madeline for the first time, he breaks into song and dance about Tiggers.

The ending quote to the song announces that he’s the only Tigger and that that’s the most wonderful thing. Tigger loves himself. He sees his own beauty, inside and out, and appreciates his uniqueness. What if we all looked at ourselves in the mirror and thought, “I’m the only me and that’s a wonderful thing”? It is a wonderful thing! We all could take a few pointers from Tigger and fall in love with the fact that we are one of a kind. 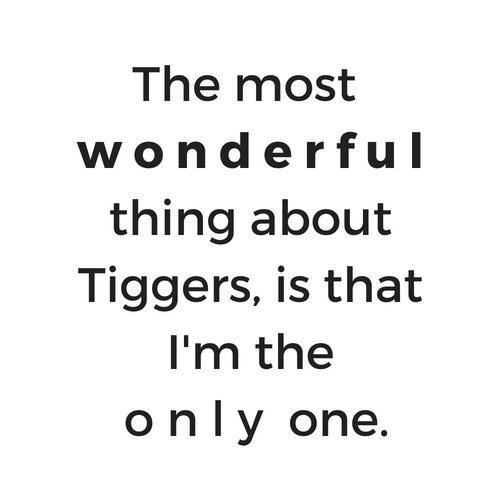 This sweet conversation between Christopher Robin and Pooh comes at the end of the movie when all is right in Hundred Acre Wood. Being present, appreciating the moment, and cherishing the gift of today is a wonderful life lesson from this film. Sometimes the chaos of life can blur our priorities, but we should never wish the days away. Finding a way to be grateful for something about every day is a beautiful way to walk through life. 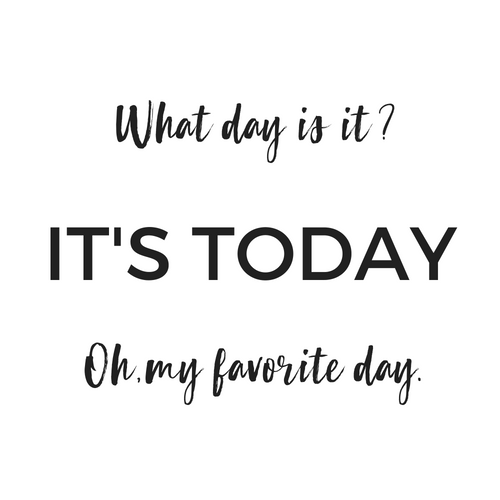 The inspiring life lessons from the quotes in Christopher Robin are perfect for all ages. More than anything, Christopher Robin is a story about family, love, and imagination. I’d say that’s something we could all cherish a little bit more. Cheers to Disney for bringing the silly ol’ bear to life on the big screen and creating a delightful story when the world could use a little more joy.

See a couple more quotes from Winnie the Pooh on this post: 18 of the Best Long Distance Relationship Quotes 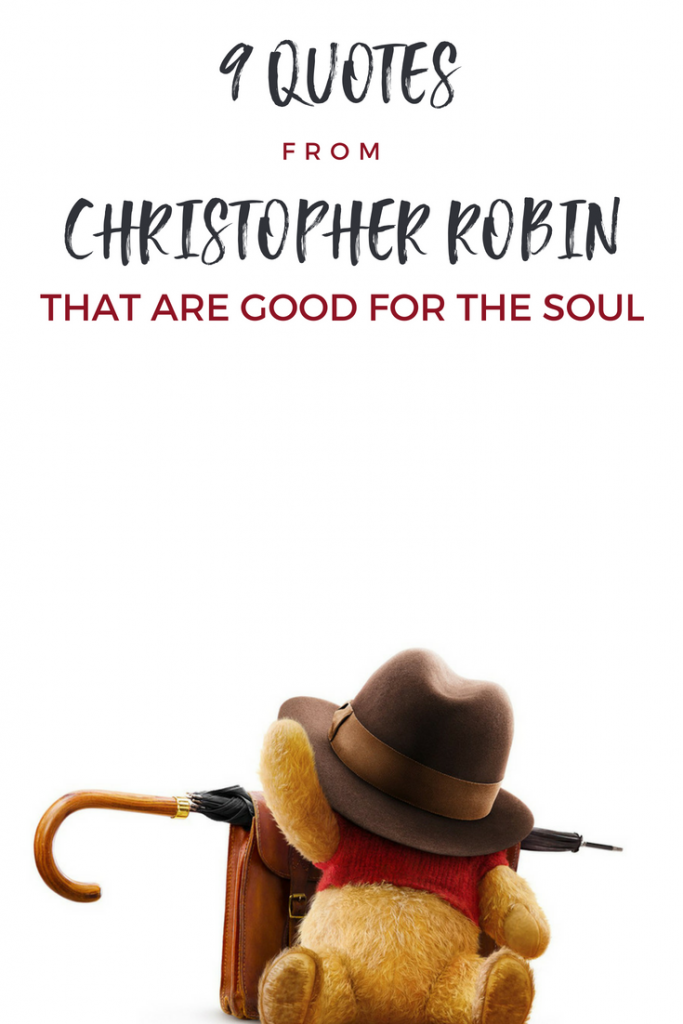 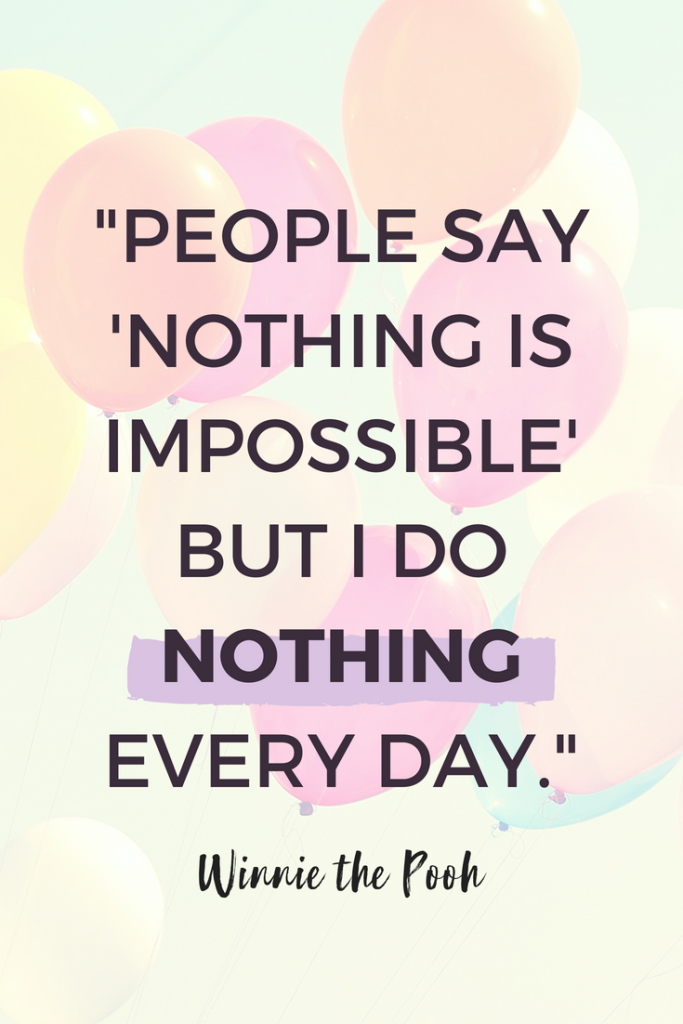 Thanks for sharing. Best article.

Hi there just wanted to give you a quick heads up and let you know a few of the pictures aren't loading correctly. I'm not sure why but I think its a linking issue. I've tried it in two different browsers and both show the same outcome.