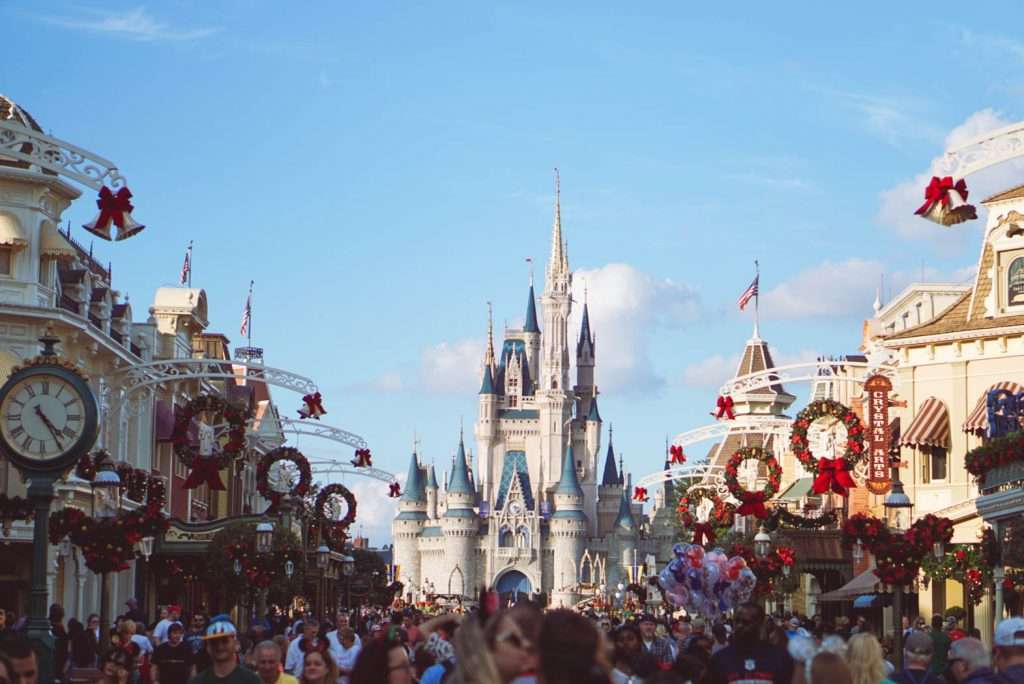 Disney World is one of the happiest places on Earth! However, you won’t be too happy if you’re waiting in line for hours, unable to get reservations, or melting in the Florida heat.
The Orlando area is one of the most visited tourist spots in the world. As a Central Florida native, I’m no stranger to the crowds, tourists, chaos, entertainment, and kids. Central Florida is awesome and I love my [coastal] hometown. I’m thrilled that people from all over the world come to visit the beauty of Florida and channel their inner child to experience all of the theme parks. But with millions of people visiting every year, is there ever a good time to visit Disney World?

Let’s start with the times you absolutely want to avoid unless there’s simply not another option (because even going during the worst times is better than not going at all!)

The last two weeks of December

First of all, always go on a weekday over the weekend, if possible. However, most of us cannot skip around the parks on any given Tuesday, but if you can take the time off from work, go for it!

But guess what? I’m an annual passholder and I live less than 90 minutes from the Happiest Place on Earth, but I simply can’t go on weekdays that often. We go on Friday nights, Saturdays, and Sundays – a lot. As any good Disney AP, we use our passes as often as possible. I think we visited Disney World close to 30 times (maybe more?!) last year. We’ve been there during the worst crowds and on some of the best days.

While this isn’t a specific guide for any particular year, it’s one you can loosely use when planning a Disney vacation any year. See below for our favorite weeks throughout the year!

The first two weeks are some of the best weeks to visit, but crowds pick up around President’s Day and the Princess Half Marathon weekend.
TWF FAVORITE: February 1-11, 2022 & February 1-10, 2023

Spring Break begins this month and spreads throughout April. Keep an eye on when Easter weekend is for the year you’re visiting. *Epcot’s Flower & Garden Festival is usually March-May. TWF Favorite: March 1-4, 2022 & March 1-8, 2023

Typically between Spring Break and Easter, early in the month is packed. Mid-April and late April might be your best bet. The Star Wars Half Marathon will increase the crowds a little, too.

The beginning to middle of May starts to get much hotter in Central Florida, but it can be a great time to visit with smaller crowds. I think it’s one of the most under-rated months to go because we’ve literally walked onto rides on an early May trip.
TWF FAVORITE: Second week of May : May 9-13, 2022 & May 8-12, 2023

Summer crowds begin, but aren’t at their worst yet.

Summer crowds are at their worst around 4th of July weekend. We avoid the month of July.

Summer crowds start to dissipate towards the end of the month. This is usually the hottest month of the year.

The very first few days of October are the best of the month. Fall can be a wonderful time in Florida, but Halloween festivities and Epcot’s Food & Wine Festival make the weekends very busy.
2022 Food & Wine Festival: July 14 (early!!) til November 19, 2022

Crowds at the beginning of the month are never as bad as the two weeks around Christmas. It really is a magical time of year at Disney World, so make sure you get there at least once during the holiday season!
TWF FAVORITE: Beginning of December (ex: December 1 – 9, 2022 or December 4 – 8, 2023) *You’ll still experience moderate crowds, but the holidays are totally worth it!

When do you plan to visit Disney World?!

You're right on the money with these tips! It's so funny how busy February and March can get now that all the Louisianans head to WDW for Mardi Gras! We still make the trip every year though because it's tradition and it's also fun to run into familiar faces all through the parks!

I live in Australia so reading this makes me envious that you have an annual pass and can visit Disney World anytime you like!!!!! Some great tips here, thank you for sharing.

Great tips here. I HATE going to Disney because of the crowds so I have avoided it. But I live in South Florida and feel like my daughter is missing out. I will try during one of these slow seasons you mentioned.

Such a helpful post. Our family has yet to visit, but the crowd factor stresses me out. Thank you for sharing.

So happy this was helpful! The crowds are one of a kind at Disney lol so it's understandable. :)