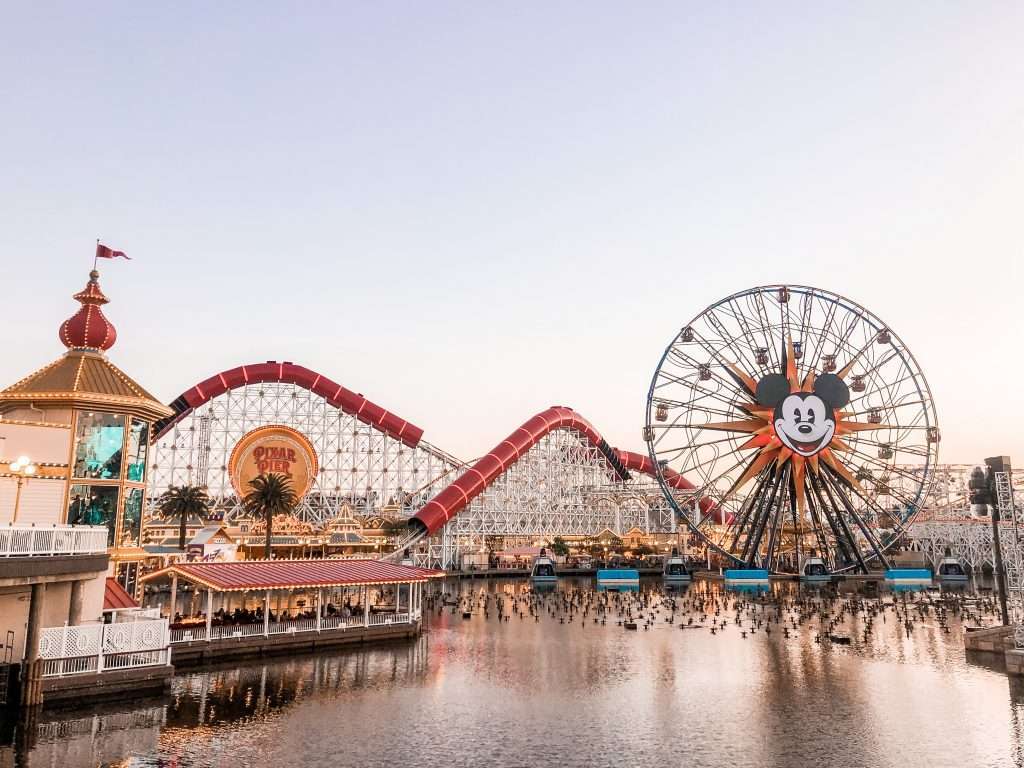 Disneyland. The OG. The park that Walt so meticulously created to bring magic and happiness into the hearts of everyone that experiences it. I finally got to be one of those people as a first-timer at Disneyland last week.

I’m a Walt Disney World Annual Passholder (WDWAP) and it’s one of my favorite places in the world. People constantly ask me if I get sick of seeing and doing the same things, but the truth is, no. Because there’s so much to do at Disney World and they’re always changing things up. Always. So there is always something new to experience, see, do, taste, etc. Disney is magical like that.

Visiting Disneyland Resort in Anaheim, California, has been on my “list” since I can remember. When I recently planned a little vacation to California, I knew there was no way I’d be on the west coast and not go. As the plans went, I’d have one full day to experience it all. Luckily for me, I had one of my best friends, her fiance, and his 6 year old daughter to show me the ropes.

When I told people I was excited to visit Disneyland and California Adventure for the first time, I had many of them tell me that it’s not as great as Disney World. It lowered my expectations, but I still felt like a kid on Christmas when we were arriving. As a first-timer at Disneyland, I expected heavy crowds, long lines, less to do, and fewer things to see. But here are my thoughts after my first visit to Disneyland and California Adventure:

We walked from our hotel room to the entrance of the park in less than 10 minutes. So. Cool. This is totally different than Disney World because there’s not a single resort on property that you can stay at and get to the entrance of any park in less than 10 minutes. There were several options available, but we stayed at The Anaheim Hotel. The hotel had a charming mid-century modern vibe, but they kind of forgot to carry it into the decor of the rooms. No biggie. Our room had two king-sized beds which made it extra comfortable for the four of us. Because the hotel was so close to the parks, we actually had a midday siesta where we went back for a nap! I’ve never done this before at Disney World and it was great to feel refreshed for the second half of the day, especially with a 6 year old. 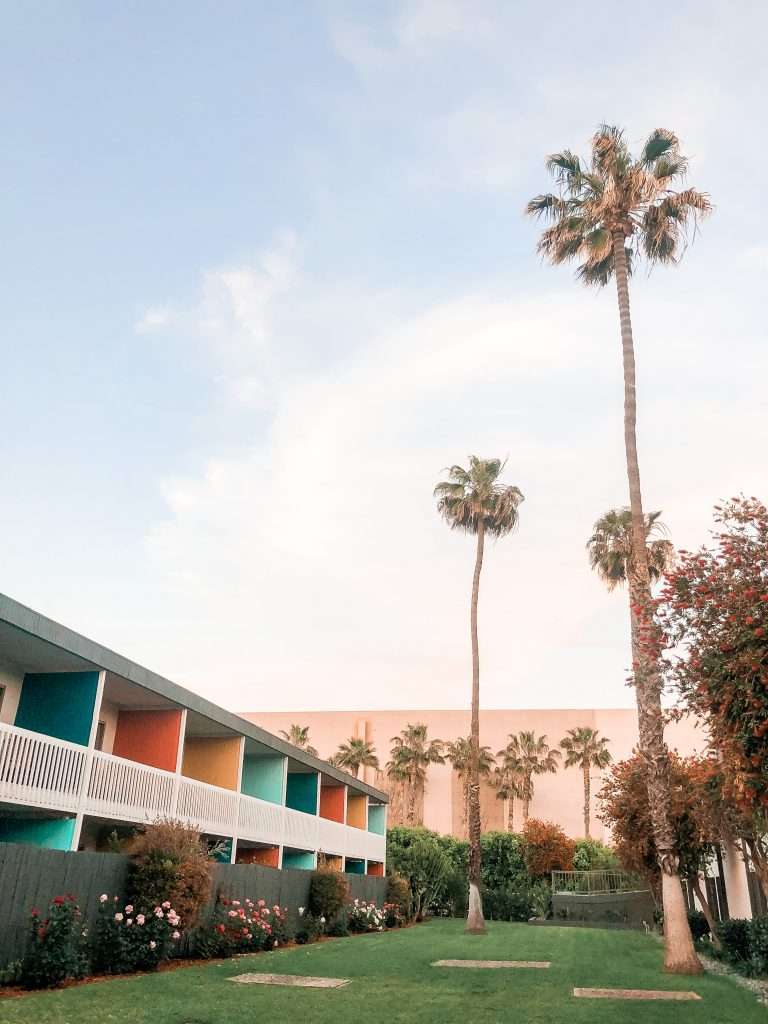 Not only is Disneyland walkable from several hotels, but it’s also walkable to Downtown Disney and California Adventure. Like, right next to each other! Again, as a WDW girl, this was just so cool to me. We didn’t have to wait for a bus, monorail, or walk to our car/drive/park/walk again. We could literally exit one park and be inside of the other within minutes.

MaxPass is an additional $15 per ticket and 100% worth it. It was a little confusing to me at first because I’m so familiar with the way Walt Disney World does their Fast Pass system. My friend’s, Sam and Mike, were totally on top of it all. With the Disneyland app on their phone, they were able to lock in a new fast pass almost every 60-90 minutes of the day. We never waited for more than 20 minutes to get on any of the rides that day. And we went on over a dozen rides. MaxPass also includes your PhotoPass downloads so stop at the photo opportunities and capture the memories!

I think the most important similarity starts with how both WDW and Disneyland Resort carry a magical beauty throughout the parks. The architecture, cleanliness, and details create a space that feels like one of a kind. From vibrant landscaping to the hidden Mickey’s, I was completely satisfied with the entire ambiance of the parks. Cast members carry similar energy at both Disneyland and Disney World Resort, guaranteeing a cheerful atmosphere. And, of course, we couldn’t miss out on a Dole Whip!

A few of the rides, especially the classics like Peter Pan, The Haunted Mansion, and The Litte Mermaid, were very similar to the ones at Disney World. Other areas, like Pixar Pier and Cars Land at California Adventure, are totally different and such a fun change in scenery. 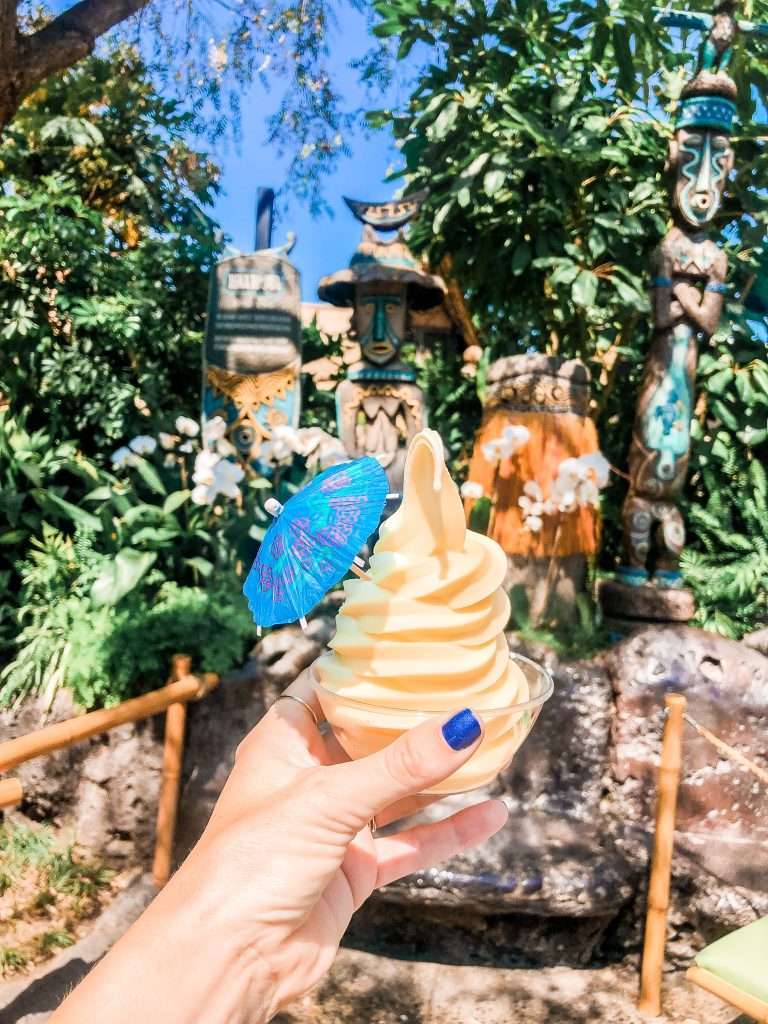 I know there are a ton of differences between Disneyland and Disney World. I actually love that they’re different in their own ways. It makes them special. While Disneyland is more compact and overall much smaller, I really do think the crowds are smaller, too. Disney World has more parks, but Disneyland is more doable in a short amount of time. The weather we had at Disneyland in April was also absolutely gorgeous. Disney World gets hit with a lot of hot, humid, and rainy weather throughout the year. That’s just Central Florida for ya. 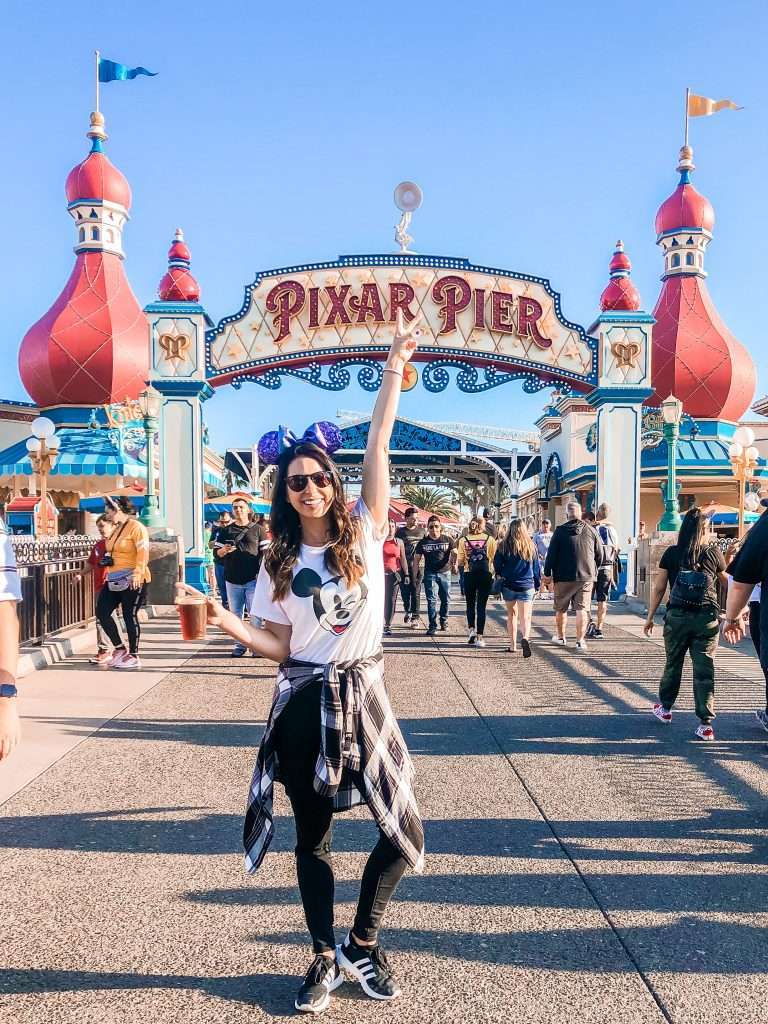 The Incredicoaster: This high-speed chase with Jack Jack was so fun! Probably one of my favorite rollercoasters of all time now.

Guardians of the Galaxy: Tower of Terror at Hollywood Studios in Orlando is my favorite. I wasn’t totally on board with the change to making it a Guardians of the Galaxy ride at California Adventure, but oh my gosh it was even better than Tower of Terror! Not only is it longer, but the drops seem higher and the entertainment is on point. I could’ve ridden it over and over.

Radiator Springs Racers: This is probably the most sought-after fast pass out of both of the parks, so if you can get one, do it. This was our last ride of the night. It had Test Track vibes, but 10x better to me. We loved it.

Indiana Jones Adventure: I liked this ride at Disneyland because we just have an Indiana Jones show at Hollywood Studios in WDW. The quick-driving style of the ride reminds me of Dinosaur at Animal Kingdom.

Space Mountain: This was similar to the one in Magic Kingdom at WDW, but you get to sit side by side. It was a ton of fun. My friend, Mike, said they refurbished it recently making it a much smoother ride, too.

World of Color Show: It’s not a ride, but you can get a fast pass-like ticket to a VIP viewing section. With water shooting up in the air, Disney does some of it’s best storytelling while highlighting classics and new releases. It’s a must-see for any first-timer at Disneyland Resort.

If you saw my Instagram Stories the day I actually went to the parks, you know that I turned the corner on Main Street and saw Sleeping Beauty’s Castle completely covered up by a facade. It was a little heartbreaking, but I just had to laugh. That’s my luck, right?! Or it’s just the Universe giving me another reason to go back sooner than later. As of late April 2019, the Castle is undergoing a major refurbishment, but it’s set to reopen on May 28th. 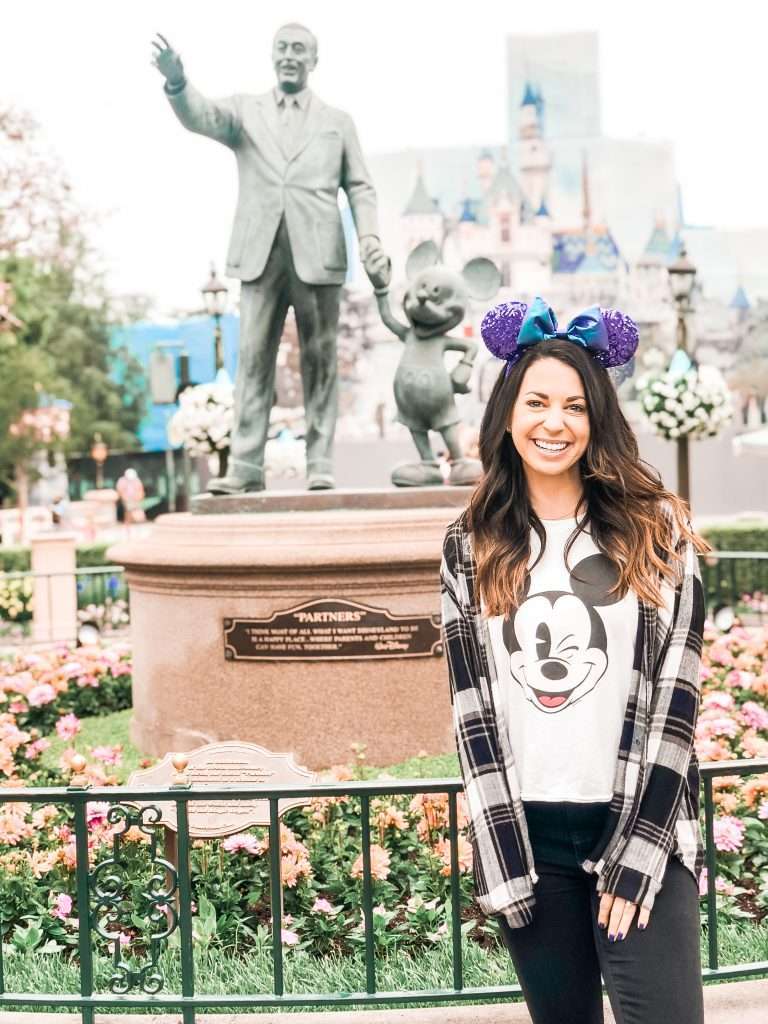 We did a lot in one day at Disneyland and California Adventure. We even walked through Downtown Disney and had lunch at Tortilla Jo’s. Because I was a first-timer at Disneyland and California Adventure, we put the majority of our energy into getting on rides and I loved it. Next time, I’d love to spend more time watching parades and shows, too. Disneyland also has some tours that would be really amazing to experience. The “Walk in Walt’s Disneyland Footsteps” tour dives into all of the inspiration that Walt had for the parks making it perfect for any Disney lover.

If you’ve been to both Disneyland and Disney World, what did you think?! If you’ve never been to either one, would you rather visit California or Florida first?! 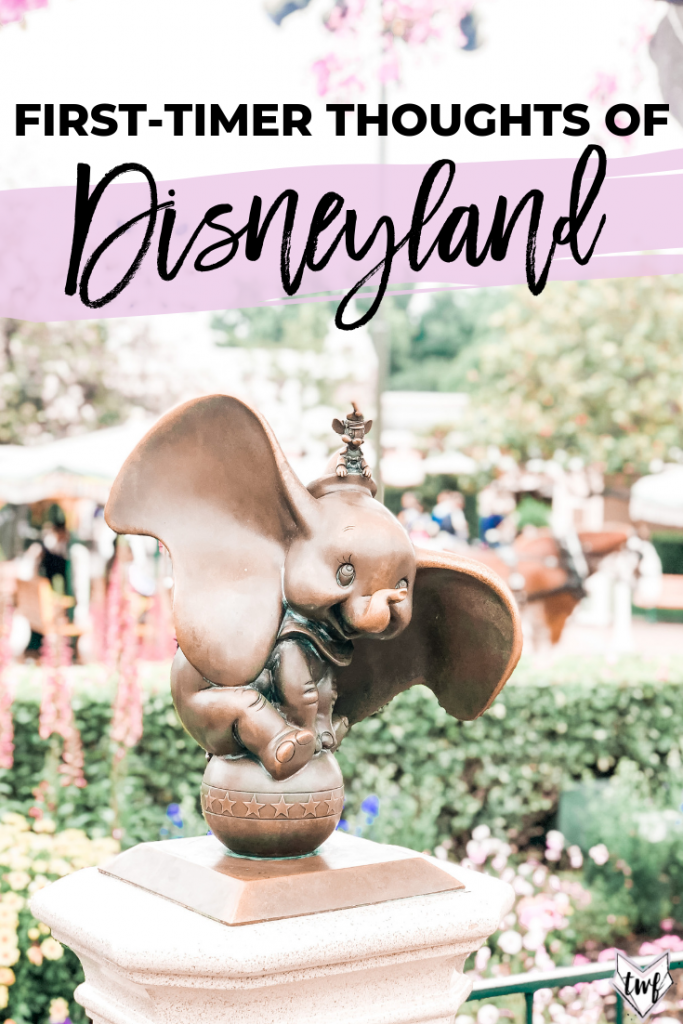