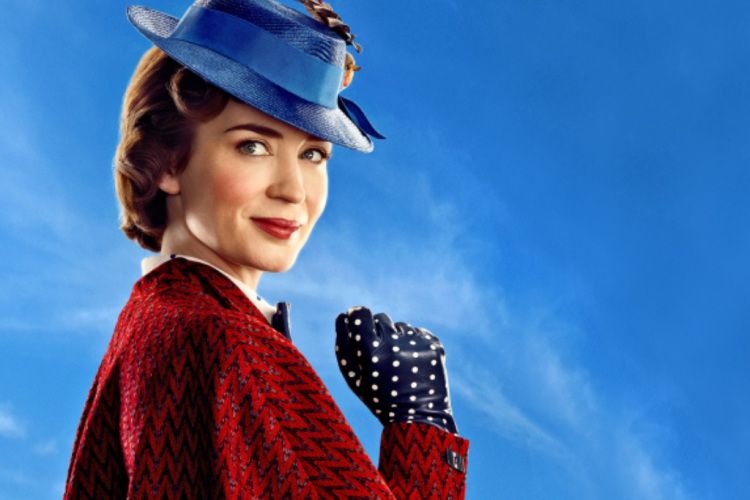 This post may contain affiliate links. That means if you make a purchase after clicking the link, I may receive a small commission at no additional cost to you! Thank you for supporting TWF!

And so she returns.

Mary Poppins, the beautiful, witty, brilliant nanny, comes back to charm our lives with her dazzling adventures. Emily Blunt, one of my favorite actresses of all time, was nothing short of incredible. Julie Andrews should be proud.

Like most movies, there’s nothing better than seeing it in the theater. Mary Poppins is all about letting your imagination take over in the most delightful way. An uplifting, optimistic, charismatic story filled with a little spice to go along with the sugar, you can’t help but love Mary. It’s as if everything she touches turns to gold because her point in life is to make other lives better. You’ll be captured by the music, fall in love with the Banks children, and melt at the sight of Mary’s sweet smirk.

With all new original songs, Disney seamlessly created magical scenes to warm your heart while having you tap your toes with a smile on your face. Beyond the exciting, old-fashion cartoon adventures that Mary Poppins takes the children on, the beautiful costumes in the film are also nostalgic and practically perfect in every way.

At times, it almost felt more like a remake than a sequel, but there’s no point in trying to figure it all out. Isn’t that the beauty of Mary Poppins, anyway?

I wrote down almost 20 endearing quotes from Mary Poppins Returns, but these were my favorite. If you caught one that isn’t on here, make sure to share it with me!

All of the graphics on this post were custom-made by Sarah from The Relatable Creatable. Please show your support and give us both a follow on Instagram!

Without further ado, here are my favorite quotes from Mary Poppins Returns:

“There’s a different point of view awaiting you if you just look up.” – Jack 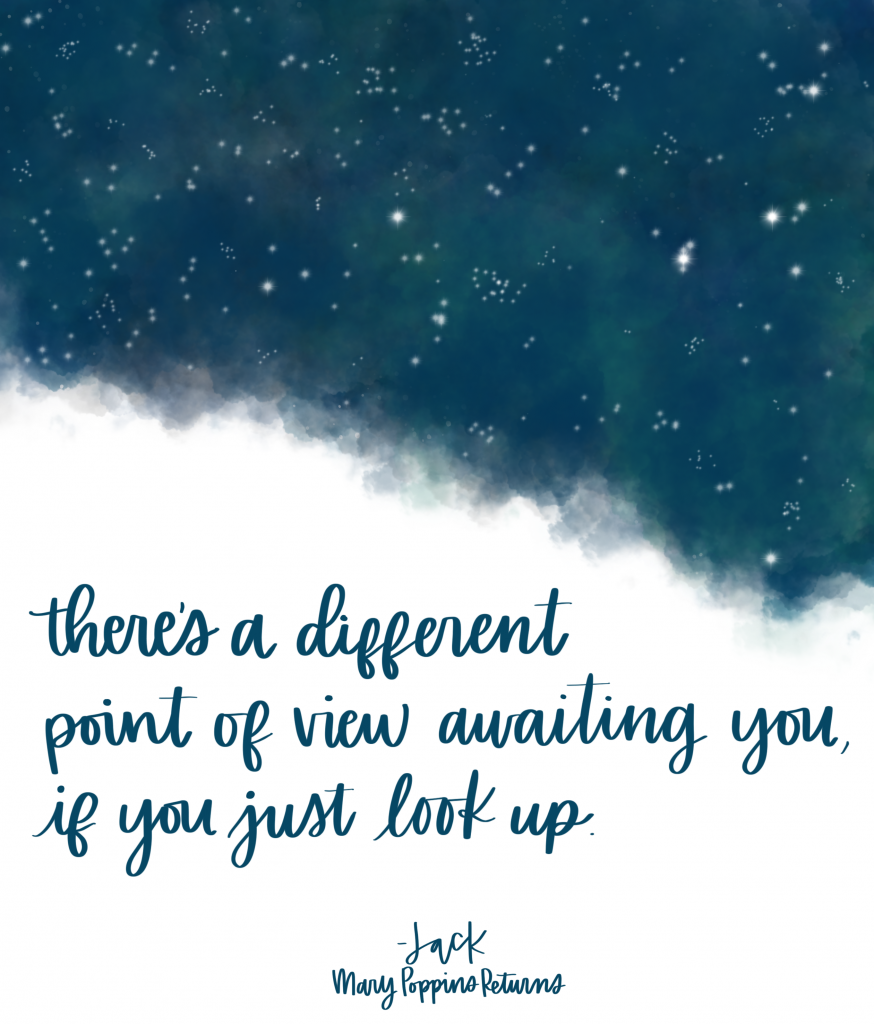 Part of the opening scene and song of the movie, Jack, played by Lin-Manual Miranda, set the tone for the entire film. He’s the adult that grows up but doesn’t forget the magic of Mary Poppins. I love taking quotes or song lyrics and applying it to everyday life. And this song lyric is no different. In fact, with just about everything in life, there’s a different point of view. If you’re searching for the brightest view of all, just look up.

“Nothing. Such a useful word, isn’t it? It can mean anything and everything.” – Mary Poppins 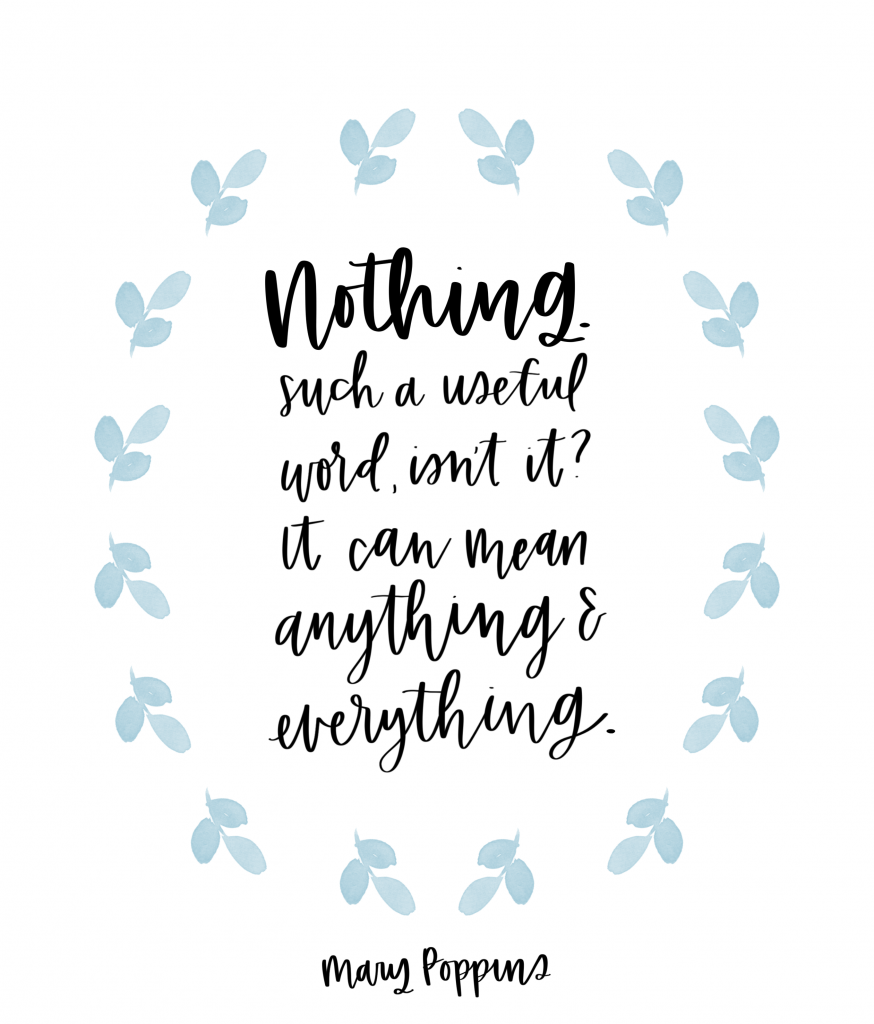 SO. TRUE. How many times in life do we use the word “nothing” when it really means everything. It’s a word that can be empty and dull or filled with so much heart and feeling. Mary Poppins has such a clever way of turning the simplest responses into so much more. Next time you go to respond with “nothing”, think of Mary Poppins and how she would challenge you to dig deeper.

“Everything is possible, even the impossible.” – Mary Poppins 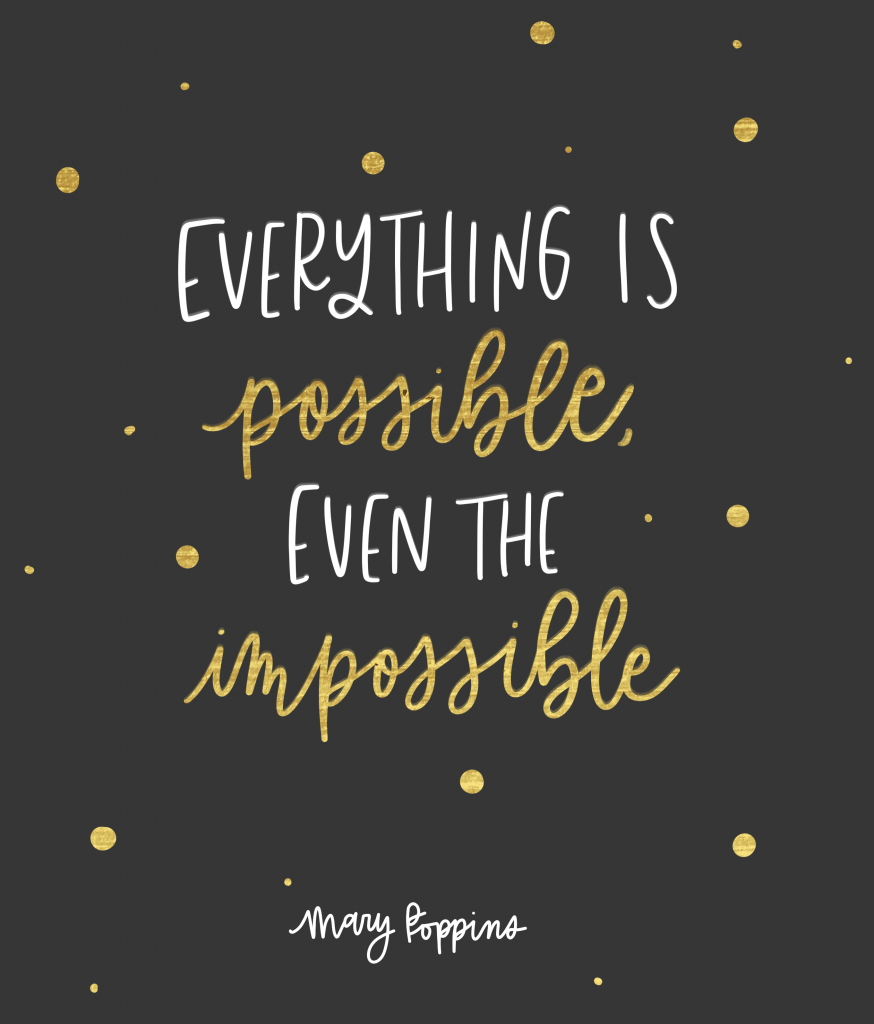 Arguably the most memorable quote in the film, this quote basically sums up Ms. Poppins as a character. She reminds us, with such few words, that all we have to do is believe in miracles. Maybe the impossible doesn’t make sense,but as Jack also says in the movie, “One thing you should know about Mary Poppins is that she never explains anything.“

“Head up and feet beneath you.” – Mary Poppins 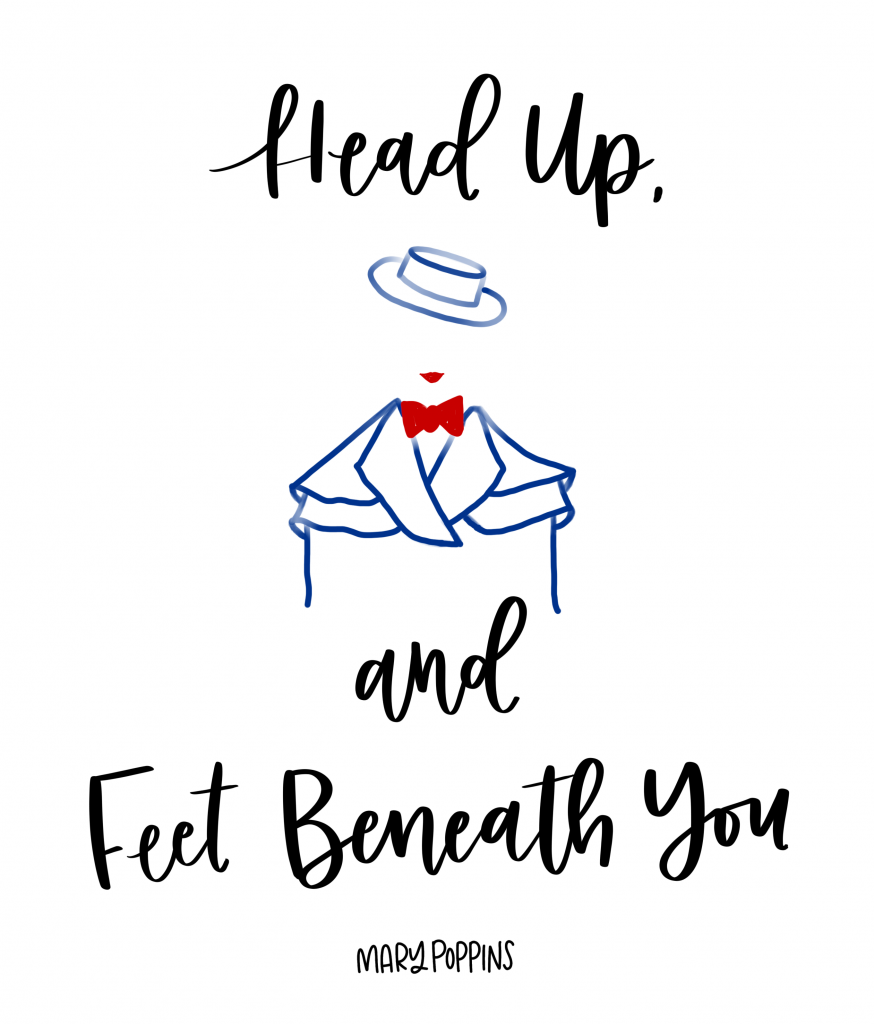 Mary is actually speaking directly to the youngest Banks child, Georgie, in a literal sense when she says this, but I think it’s beautiful advice for all of us. While most of us don’t have to worry about stumbling over our own feet, it is a brilliant motto to follow. If the day gets tough, our hearts feel heavy, or we’re simply feeling down, remembering to keep our “heads up and feet beneath us” will keep us grounded. Thank you, Ms. Poppins.

“We’re on the brink of adventure, children. Don’t spoil it with questions.” – Mary Poppins 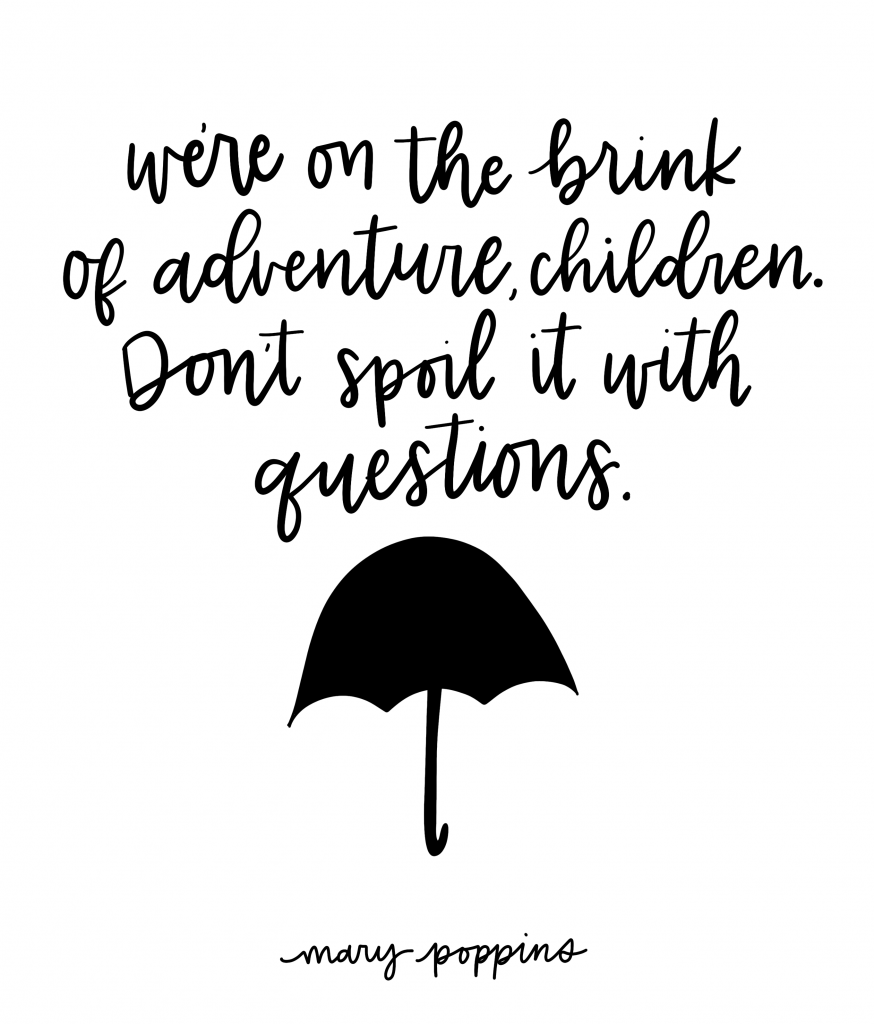 Mary Poppins’ matter-of-fact delivery is always so refreshing. Straight to the point, yet somehow polite, I’m pretty sure I would do just about anything she asked of me. This quote is the perfect reminder to not spoil too many things in life by overthinking it all. And yes, I’m the Queen of Overthinking, so this one tugged at my heart.

Life throws so many curve balls, but it’s important not to miss the fact that those curve balls are adventures. Questioning every little thing will take away the magic of it all.

“A cover is not the book. So open it up and take a look.” – Mary Poppins 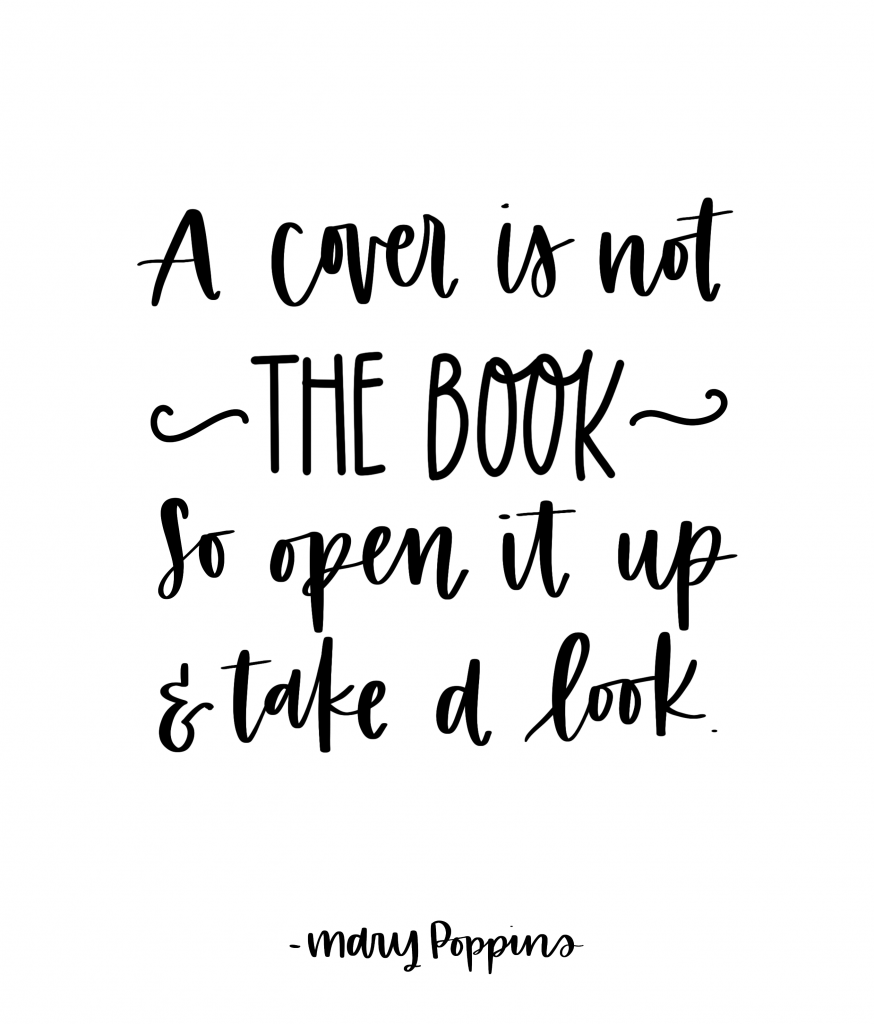 Isn’t it wonderful that the youngest Banks sibling discovers the true meaning of this song lyric first?! This song, performed by Mary Poppins and Jack, was delightful and charming, filled with dancing penguins and fairytale fables. But just as Georgie learned, we should all know that “a cover is not the book”.

“After all, you can’t lose what you never lost.” – Mary Poppins 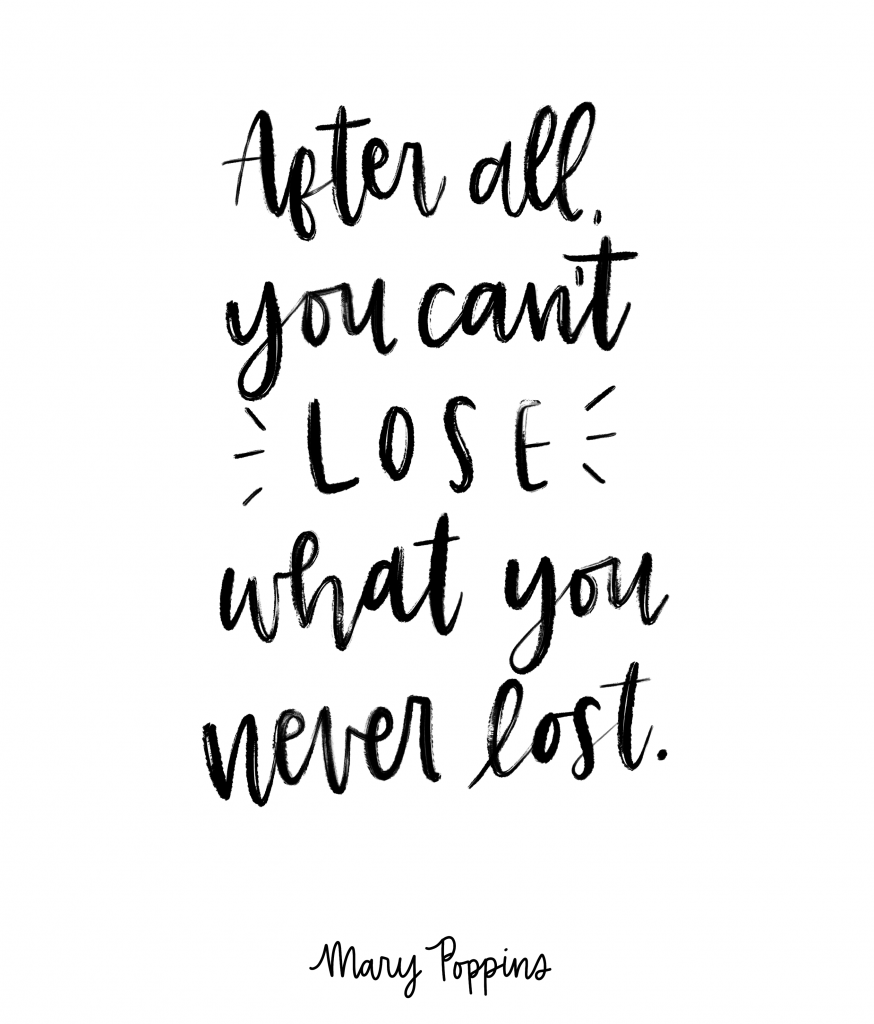 Mary Poppins is speaking about the children’s mother when she says this, and it leads into one of the sweetest songs of the whole movie. I believe we often use such strong words, like “lost”, and it makes things feel more permanent and tragic. All it takes is a little flip in the mindset to realize that we don’t lose people. We know exactly where they are, and that’s the beauty of this quote.

“Nothing is gone forever, only out of place.” – Mary Poppins

This is a lyric in the song, The Place Where Lost Things Go, and it completely melted my heart. Emily Blunt blew me away with her voice in this movie, but I hung onto every word of this particular song.

“For when you dream, you’ll find all that’s lost, is found.” – Mary Poppins 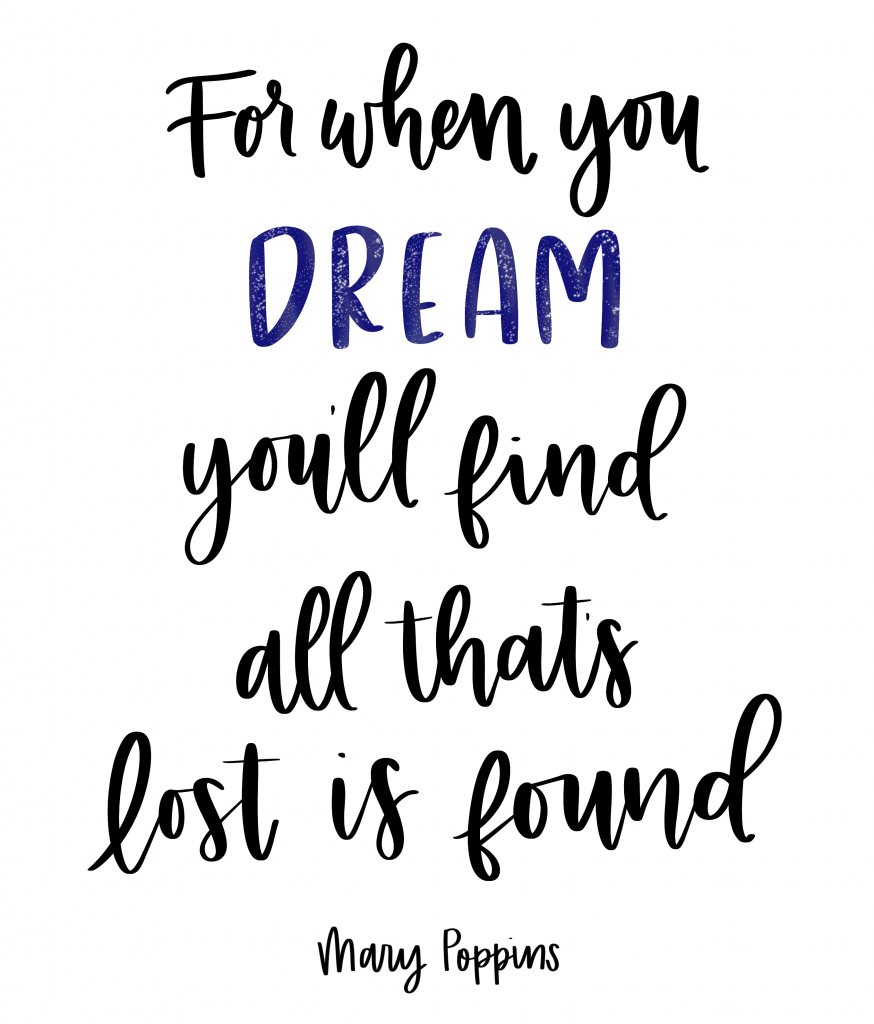 Again, as one of my favorite songs in the movie, I had to pull another lyric from it. I’m a dreamer. I’m a daydreamer, a night dreamer, and just a big fan of dreams. I think they mean so much more than we ever truly realize. Whether it’s a broken heart, a feeling of emptiness or uncertainty, a dream is one place we can always go to make things better.

Whatever you feel is “lost” (doesn’t have to be a person) can be found when you allow yourself to just dream again. 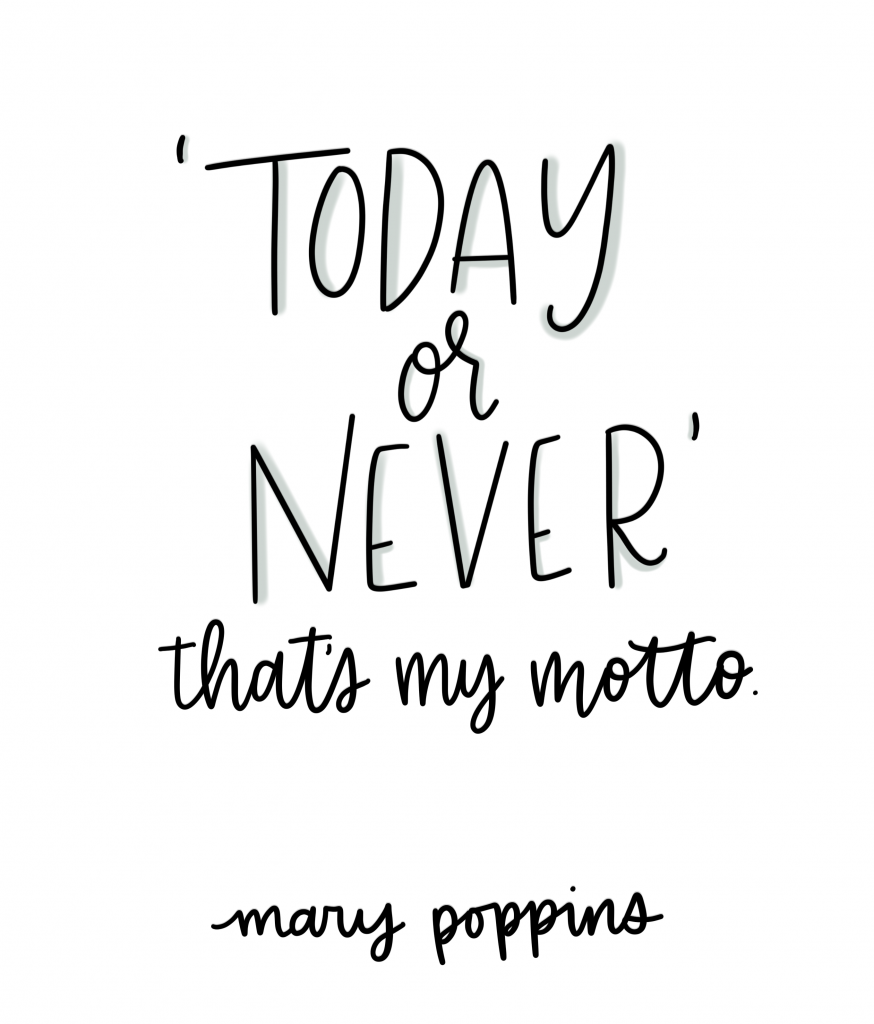 I believe this is Mary Poppins’ twist on “you only live once“, right?!
What if we all chose to do things today or never? Why do we wait for the perfect time? What if we chose to not put pressure on tomorrow, but instead, go for it today? So many more things in life wouldn’t be pushed off. More dreams, passions, and adventures would come to life on a daily basis. So, what are you waiting for? Today or never.

“When the world turns upside down, the best thing to do is turn right along with it.” – Mary Poppins 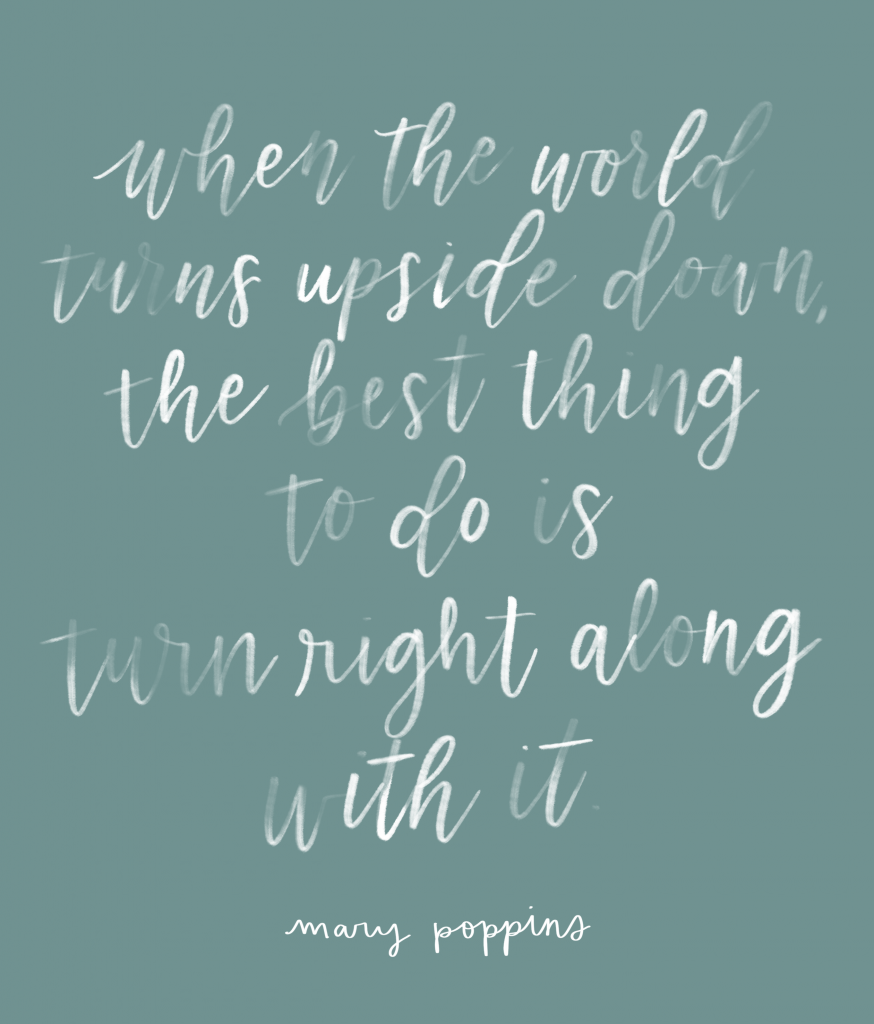 One of my favorite scenes in the film involved Meryl Streep’s eccentric and wild character, Cousin Topsy Turvy. On the second Wednesday, her world turns upside down and she has no idea how to function with such chaos. Comparing herself to a turtle turned on her back, all it takes is Mary Poppins’ point of view to change the way she feels about it all.

“You’re too focused on where you’ve been to pay attention to where you’re going.” – Mary Poppins 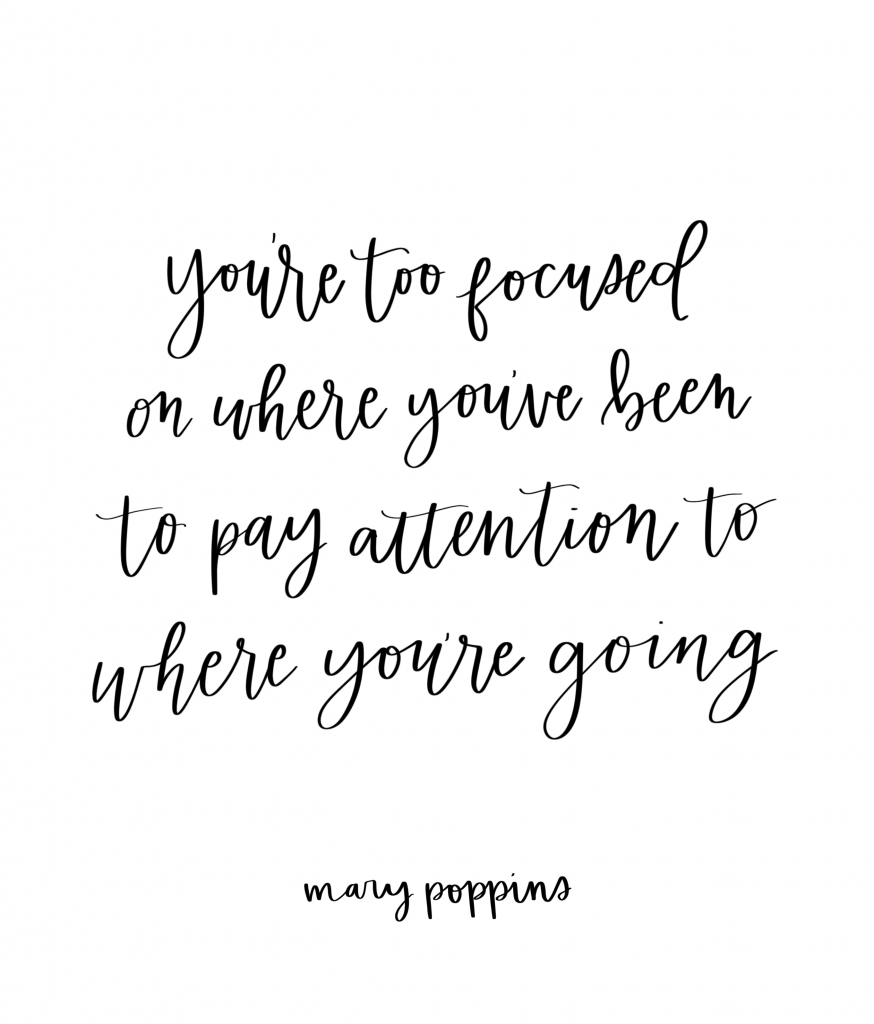 As Emily Blunt stated in an interview, Mary Poppins comes back into the Banks’ life to save Michael, not the children. However, the children are the ones that get to experience the excitement and magic. When they get lost in the fog on their way home, they find much more than what they were looking for! 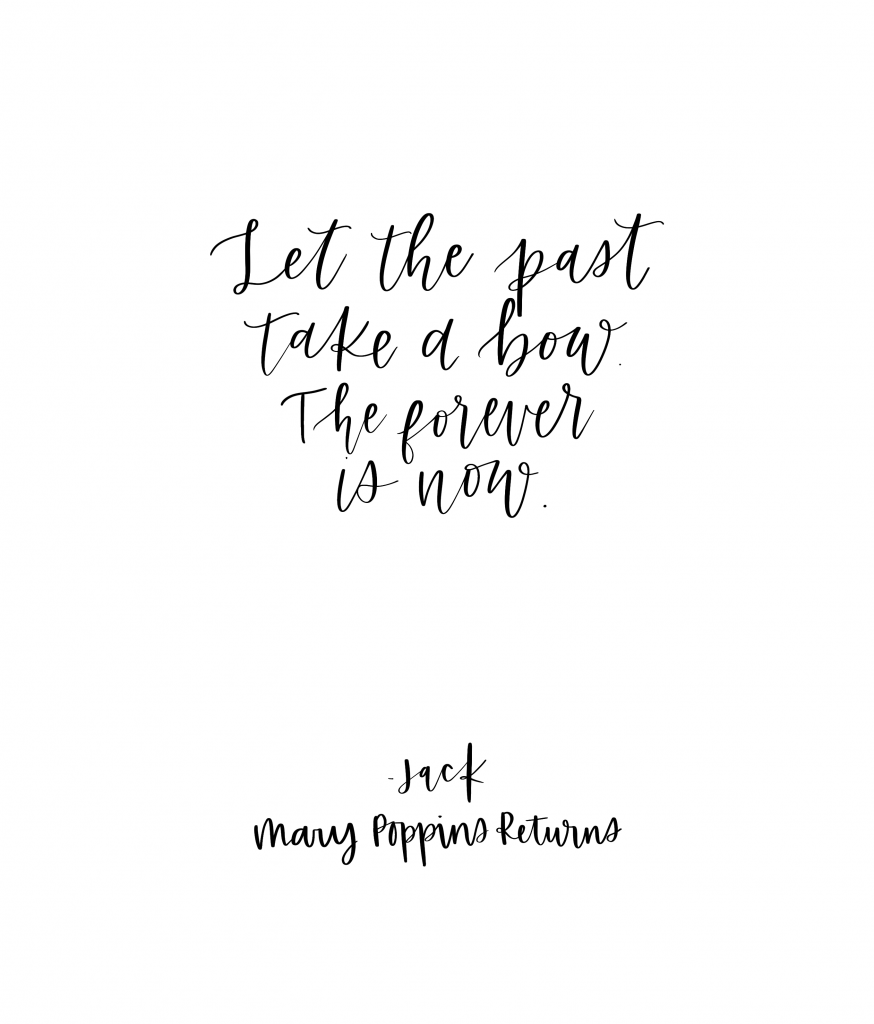 Could this quote be any more powerful?! It’s a wonderful reminder to let the past be in the past. It had its own moment in time and, probably, created many of life’s lessons. However, that scene has come to a close. Give the past the honor and respect it deserves. Let it take a bow, but then allow the present and future lead the show. 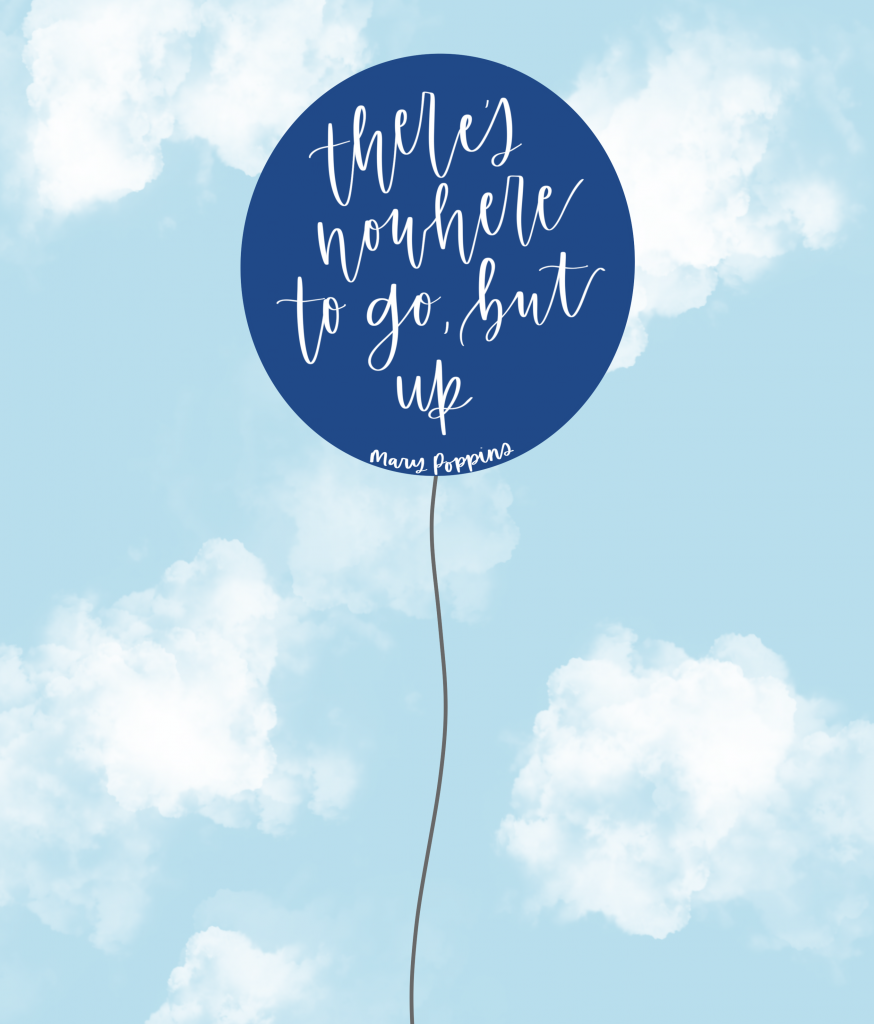 When Michael Banks is told he’s “forgotten what it’s like,” by the woman selling balloons, he responds, “To hold a balloon?”.
“To be a child,” she says. And as he grabs that balloon, he remembers so much more.
The final song of the film ended with “Nowhere to Go But Up”, performed by basically the entire cast as they float through the sky on balloons. 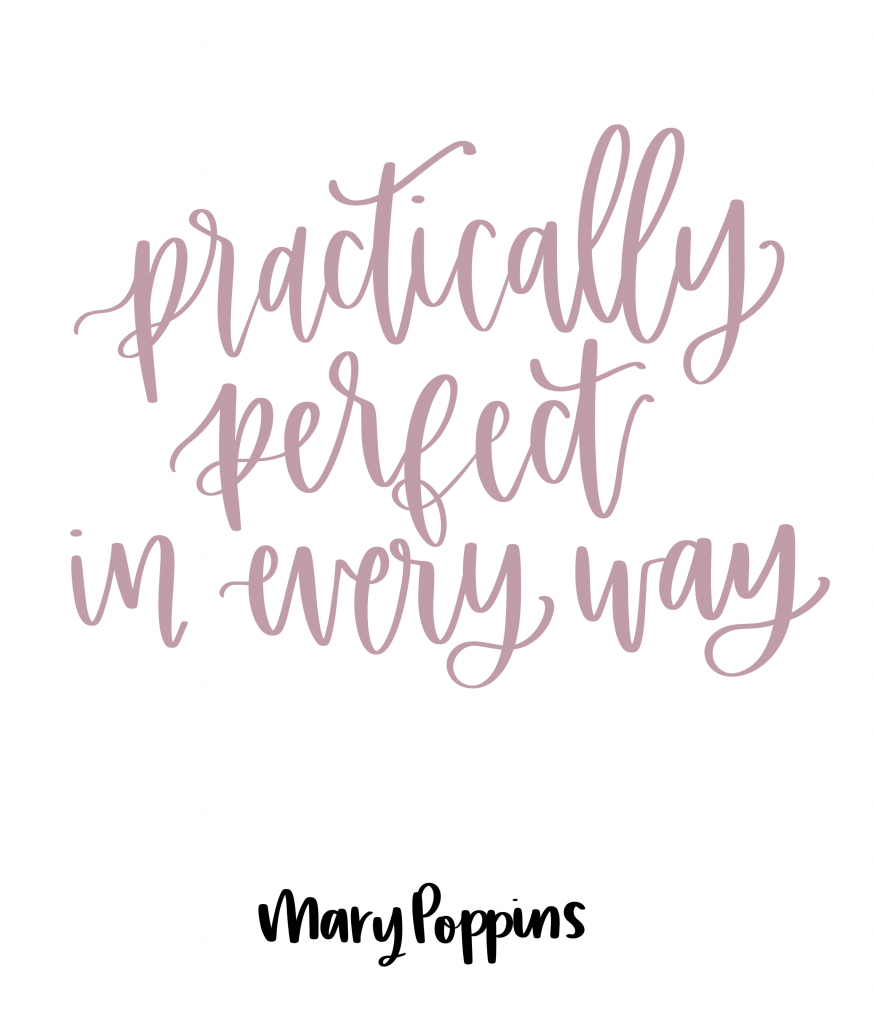 As I mentioned above, the film can sometimes almost seem like a remake rather than a sequel, but only in the best ways. With nods to the 1964 version throughout the two-hour adventure, the one quote I was waiting to hear was this one. And they didn’t let me down. If you ask me, Disney made Mary Poppins Returns practically perfect in every way.

Mary Poppins Returns is 'practically perfect in every way'!Click To Tweet

Okay, Poppins fans. Give me all your thoughts and flood me with more of your favorite quotes from the film!

And don’t forget! If you love this post, you need to check out:
9 Quotes from Christopher Robin that are Good for the Soul
8 Quotes to Live By from The Greatest Showman 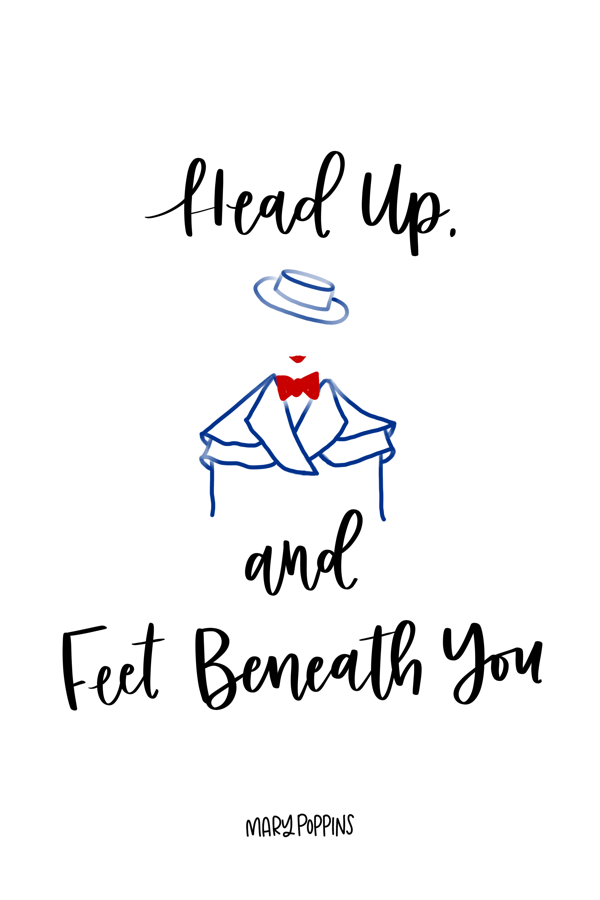 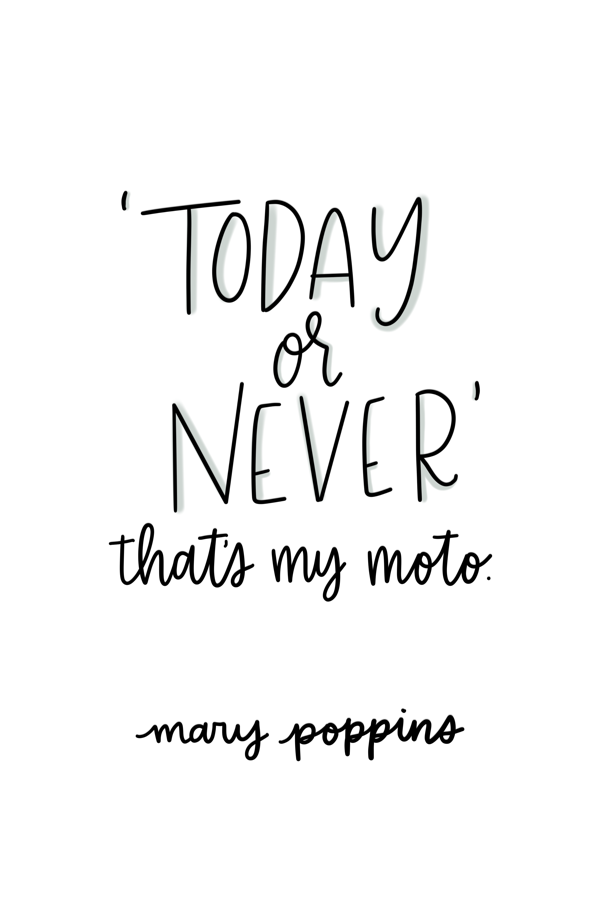 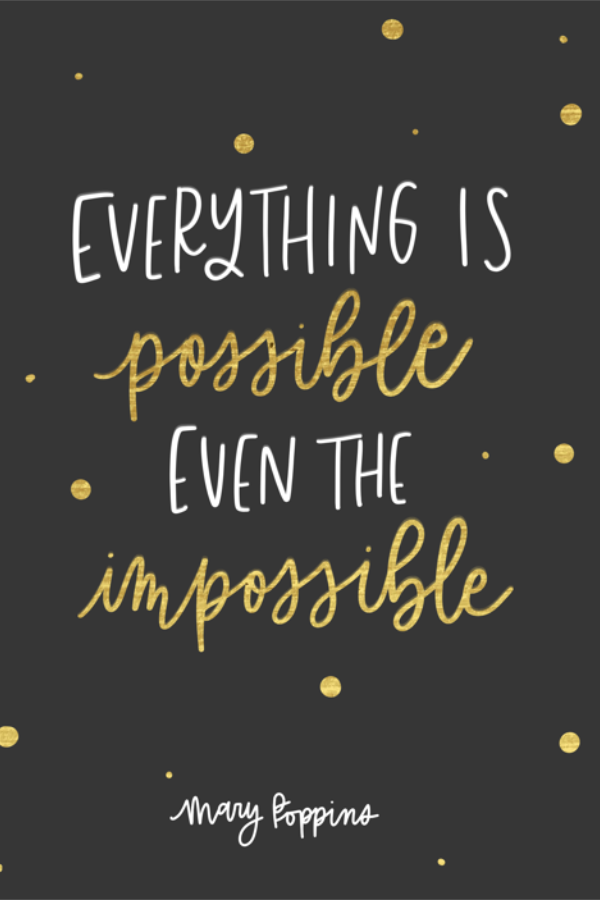 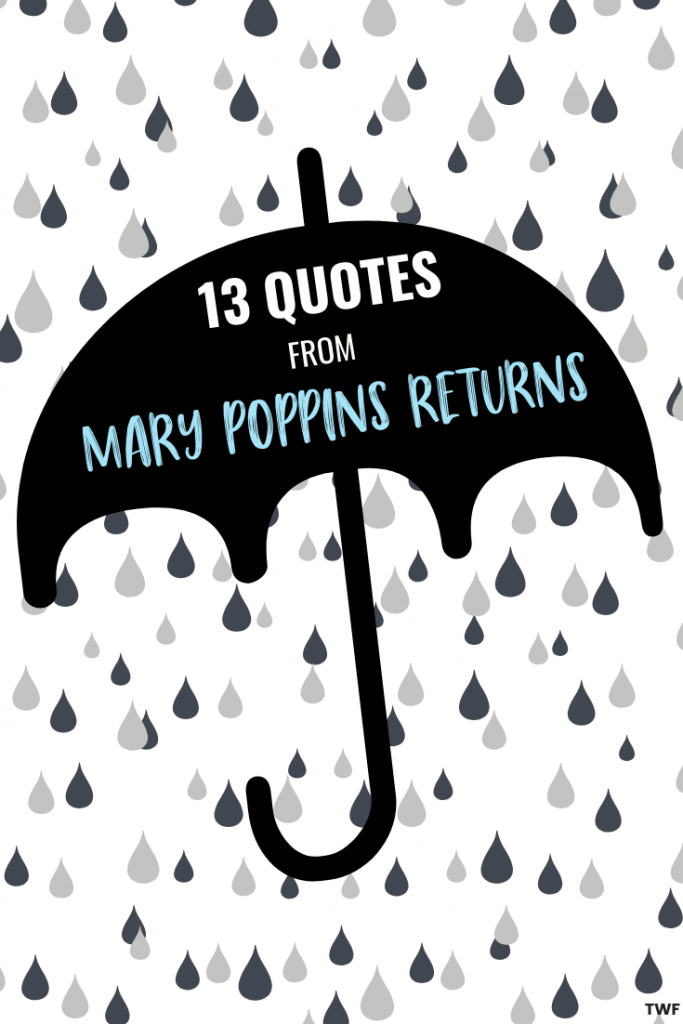 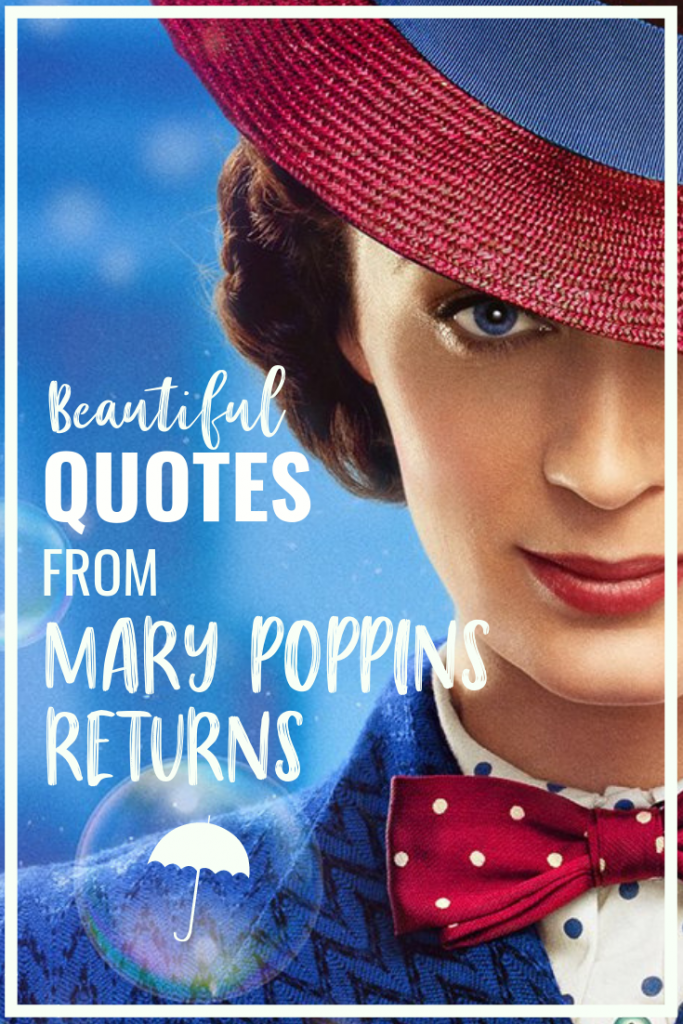 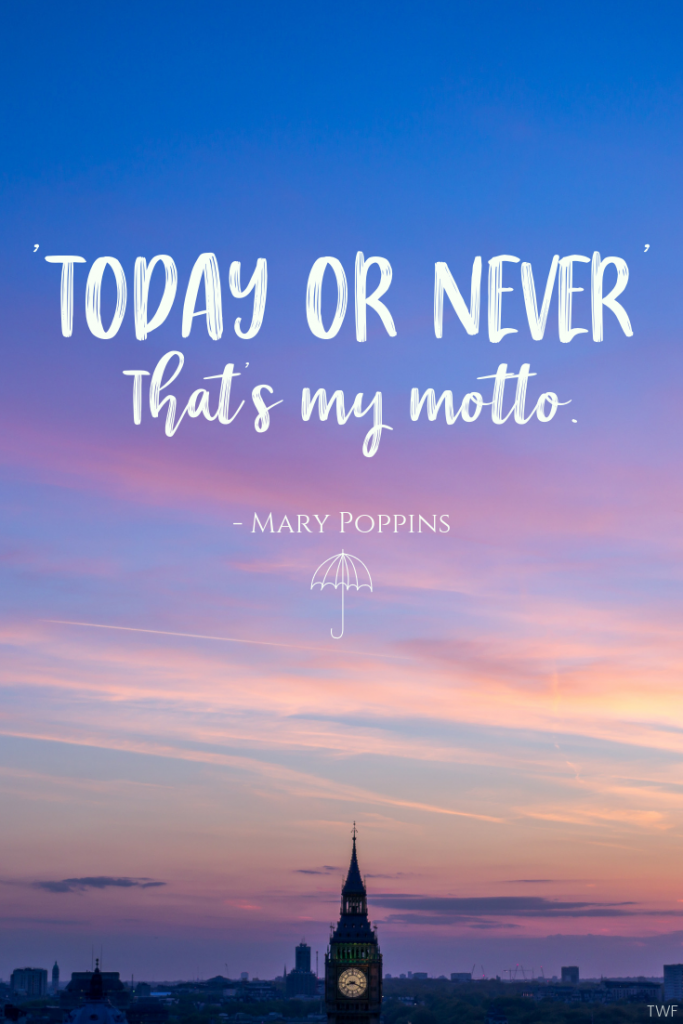 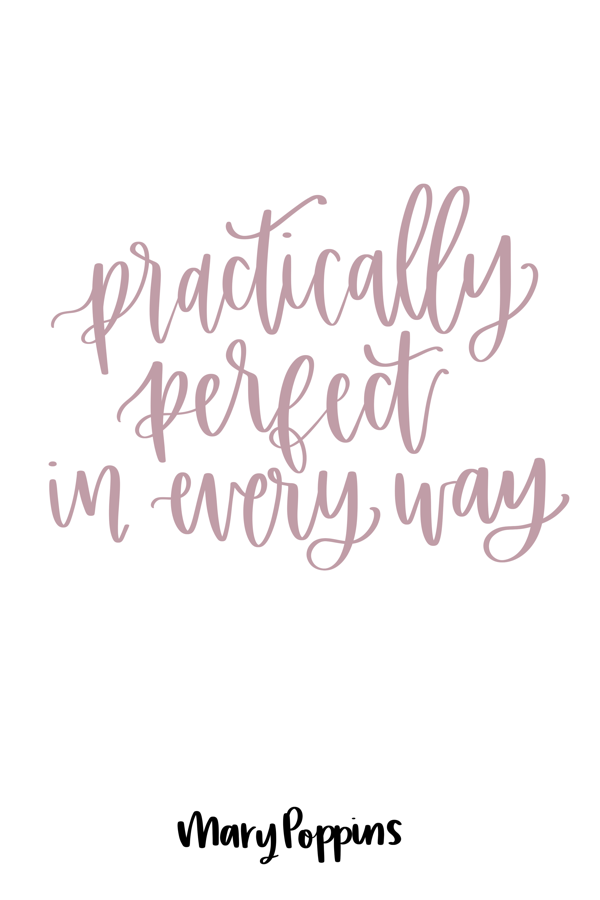 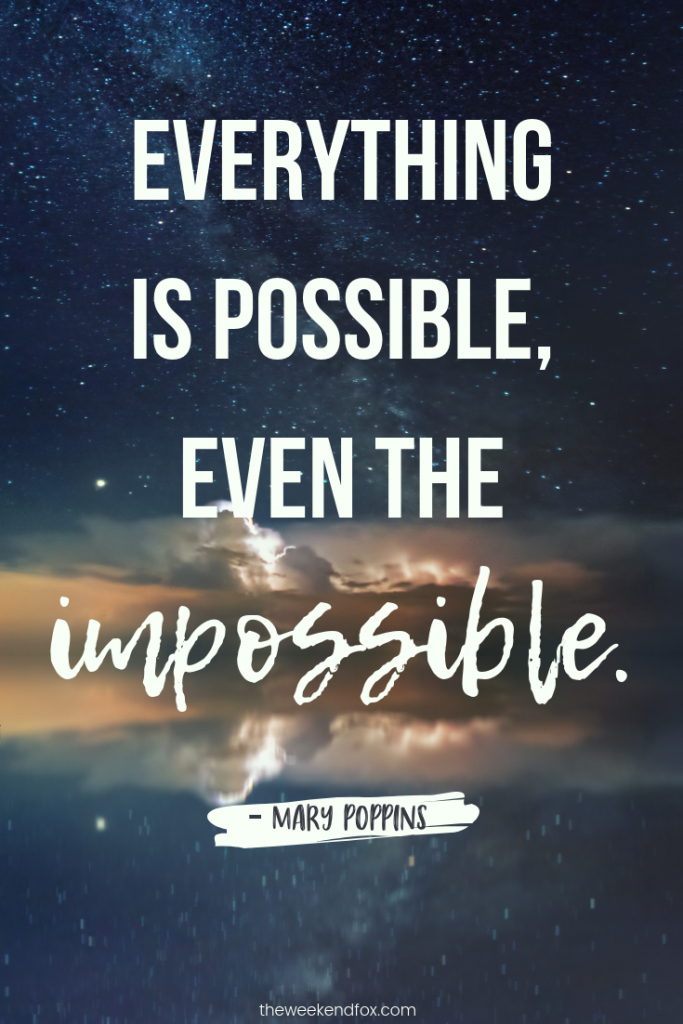 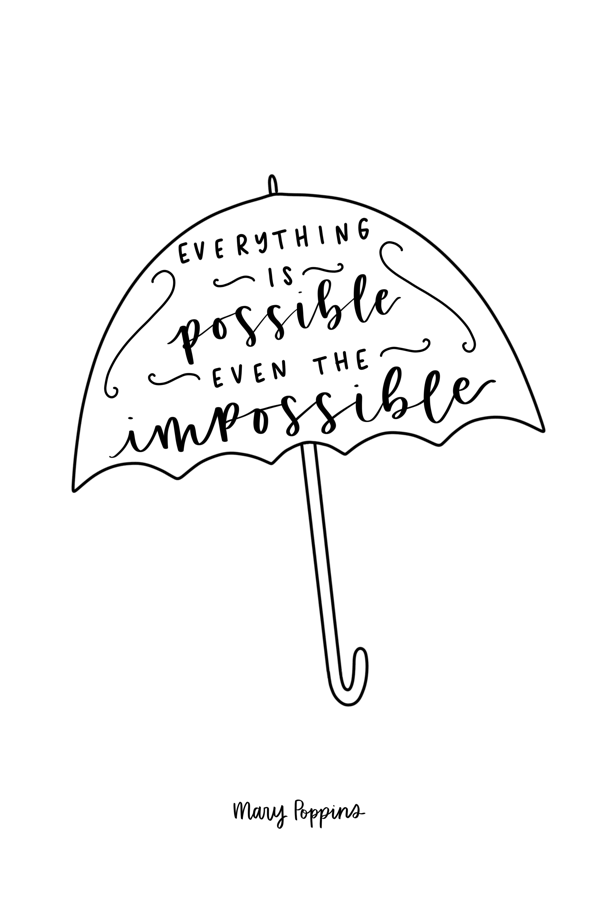 Get Instagram followers from FollowGator.com for as cheap as $3. Instant delivery, real followers, and live support.

Excellent blog! Do you have any tips for aspiring writers? I'm hoping to start my own website soon but I'm a little lost on everything. Would you recommend starting with a free platform like Wordpress or go for a paid option? There are so many options out there that I'm totally confused .. Any tips? Appreciate it!

Your home is valueble for me. Thanks!…