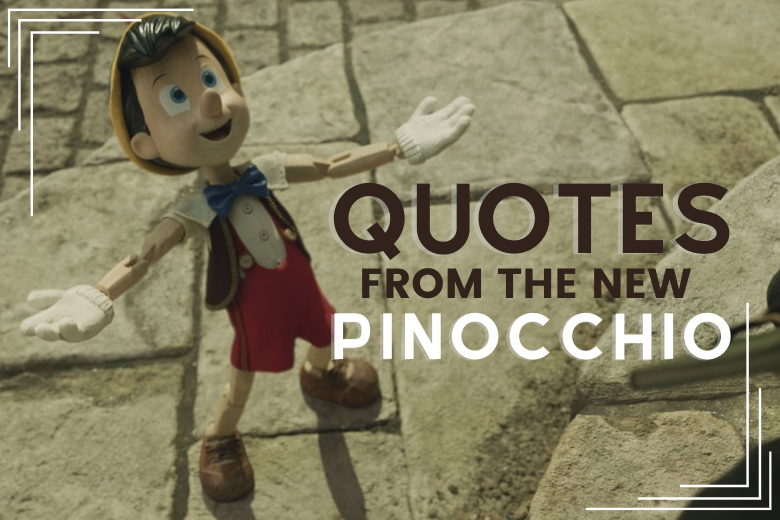 After quite a lull in new movies over the last couple of years, I’d say the summer of 2022 didn’t let us down. With top blockbusters like Top Gun: Maverick, Jurassic World: Dominion, and Minions: The Rise of Gru, it’s been refreshing to have options again! As a lover of Disney remakes, I’ve been so excited about the new Pinocchio for months.

However, when I first heard the “live-action” version of Pinocchio would only be on Disney+, I was kind of disappointed because I love the big screen. But with all of our Ironman training going on right now (you can see more of that on Instagram), a date night in was exactly what we needed. It instantly warmed my heart and dazzled my imagination. It only made sense to spoil you all with a recap of some of my favorite quotes from the new Disney+ Pinocchio (2022).

As I’ve said in other posts with movie quotes like The Greatest Showman and Christopher Robin, I’m not a movie critic. It’s not about recapping the movie or throwing my two cents in there. If you’ve landed here, you were probably sweetly surprised with the way an old movie could feel brand new. A fun and meaningful storyline can lead to so many adorable moments, and who doesn’t love Tom Hanks!? (Pretty sure he was the only “live-action” part of Pinocchio 😂).

All of the graphics on this post were custom-made by my talented friend, Sarah. Please link back to this post if you use them on social media.

Here we go with some of my favorite quotes from the new Disney+ Pinnocchio (2022)!

“…Memory may hold the key to feeling how I felt when he was here with me.” – Geppetto

Like most Disney movies, Pinocchio has an incredibly sad plot of Geppetto no longer having his son. At the beginning of the movie, we see him in his workshop, finishing up Pinocchio. He softly sings to himself and I caught this line in there.

It felt like the perfect way to wrap up feelings of loss. Memory. Our memories are what carry on forever and can make something we love live on every day in our lives.

“A conscience is that still, small voice that most people refuse to listen to. And that is the entire problem with the world today.”

This is probably my new favorite quote from Pinocchio! That adorable Jiminy Cricket couldn’t have said this better. The quote seems incredibly fitting for today’s day and age.

“Let your job restore your pride, and let your conscience be your guide.” – Blue Fairy

The Blue Fairy makes a grand and glowing appearance in the new Pinocchio movie. As she’s talking with Pinocchio about what it will take to be a real boy one day, she puts emphasis on the “job” of becoming a real boy and reminding him that his conscience is the foundation of it all.

“The most important part about being real isn’t what you’re made of… it’s about what’s in your heart.” – Blue Fairy

Oh, my heart. The Blue Fairy is basically a big ball of genuine and wonderful reminders. Pinocchio is hung up on the fact that he’s made of pine instead of being a real boy. The Blue Fairy wants him to know, immediately, that the things that make us “real” are in the heart.

“When you wish upon a star, your dreams come true.” – Blue Fairy

I couldn’t NOT include one of the most recognizable and traditional Disney quotes out there. The song, “When You Wish Upon a Star” is basically The Walt Disney Company’s signature song. You hear it at the beginning of most Disney films, but you get to see the Blue Fairy sing it in the new Pinocchio movie!

“But the point is a lie can really change a person.” – Jiminy Cricket

Jiminy’s one-liner wisdom is some of the best in the movie. Wouldn’t we all do a little better with a Jiminy Cricket conscience by our sides? I love this quote because one thing I’ve learned over the years is how much I value truth and honesty.

I’d rather hear the truth, even if it hurts, more than I’d rather hear a pretty lie that feels good. The ironic thing about telling a lie is that it usually is told in hopes of not hurting someone. But the truth comes out. It always does, and the lie hurts even more. Therefore, a lie can really change a person.

“I met some really nice people, Jiminy. They helped me and they didn’t even have to,” – Pinocchio
“Well, that’s what friends do.” – Jiminy Cricket

Some of the sweetest quotes from the new Pinocchio movie come from the innocence of Pinocchio’s new life experience. It’s easy to take some of the kindness around us for granted. Jiminy chimes in to remind us that friends look out for one another without expectation.

“What the cuss is that all about?!” – Jiminy Cricket

I had to include this because I giggled out loud when I heard Jiminy say it. Disney continuously does an amazing job at making their family-friendly movies perfect for both children and adults.

This little one-liner couldn’t have wrapped it up better. It’s the perfect mix of censor for kids and funny for adults. Because we adults all know a few good words that could replace “cuss” in that line!

Pinocchio finds his personality very quickly, and one of my favorite parts about it is his ongoing optimism. You can catch him saying, “Positive thinking!” multiple times throughout the movie.

“You honestly did try with all of your heart, and that makes you a truthful boy. And you know what else it makes you? Unselfish. And very, very brave.” – Geppetto

Geppetto is an interesting character to me, really. I find him odd, sad, and quirky, but also loving, giving, and brave. The love he has for Pinocchio is fierce, and I added this into the quotes from Pinocchio because Geppetto talks about Pinocchio’s effort.

I feel like in today’s world we are so caught up in doing all of the things and doing them perfectly. In reality, just the effort, the honest “try” in it all is the greatness. We can’t always win. We can’t always get the perfect outcome. But we can try with all of our hearts which makes us honest, unselfish, and brave.

“When you first came to me, I might have made you think I wanted somebody else, but it was you I was wishing for.” – Geppetto

“There isn’t a single thing I would change about you.” – Geppetto

I decided to wrap up the quotes from the new Pinocchio movie with this loving quote. It’s something I think all of us would love to hear from our loved ones. As we try so hard to constantly change little pieces of ourselves because that’s what we think others want, hearing a quote that we are absolutely perfect, and loved, as we are, is everything.

Let me know some of your favorite quotes from the new Pinocchio!