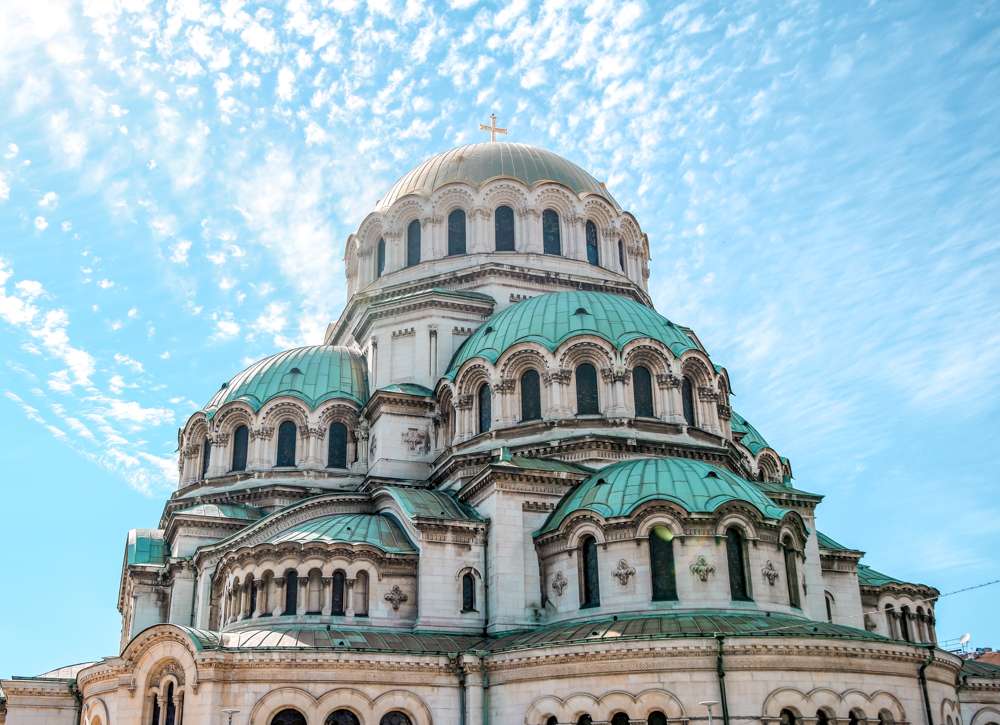 Sofia is a hidden gem in Europe. I’ve been hesitant to even hype it up too much because part of me wants to keep it to ourselves (and the other 1.2+ million locals that live here, but you get what I’m saying). It’s truly a thriving metropolitan city with so much to offer both residents and visitors.

Sofia is the capital city of Bulgaria, a Balkan nation that borders Romania, Serbia, Greece, Turkey, and Macedonia. Bulgaria has a coastline along the Black Sea and is a short flight from major European destinations like Italy, Greece, and France.

As the 14th largest city in the European Union, Sofia is known as one of the top places in the world for start-up businesses and was also the most affordable capital to visit less than a decade ago. It has more than 2,000 years of history and had a communist government from 1944 until 1989 which shows in some of the architecture of the buildings. It sits right at the edge of Vitosha Mountain, which makes for a beautiful backdrop to the city.

I’m excited to share more about Sofia and plan to create travel guides, but pulling together this Q & A about living in Sofia over the last 7 weeks has been the best way to include you all on the journey so far! Keep reading for the answers to the most popular questions.

Q: How did you and Nick meet?

The first thing people assume when I tell them I’m living in Sofia with my boyfriend, Nick, is that he must be Bulgarian. He’s actually a California native with German citizenship, too. So that brings us to the most common question, “How did you and Nick meet?”

Nick and I first met 11 years ago in Huntington Beach, California through mutual friends. We hit it off immediately back then, but life happens and we were a country apart so we naturally went our separate ways.

We reconnected as I was right in the thick of my divorce but, eventually, we decided to give the relationship a real shot, even if it meant dealing with a long-distance relationship in the middle of a pandemic. It actually makes me believe the Universe has my back and that whole “right person at the wrong time” thing could be real. We just got lucky enough to fall for each other at the “right time” this time around.

I also fully believe that having a friendship as the foundation of our romantic relationship has made our love and respect for each other that much stronger. Being forced to spend weeks apart, but still choosing to grow the relationship, has made us patient and insanely grateful for our bond.

Q: Why did you choose to live in Sofia, Bulgaria?

This is definitely the second most popular question. And I get it. Living in Sofia was never on my radar until Nick brought it up. I had to look at a map over and over just to process its location.

The short answer: for Nick’s career.

When the pandemic hit, he decided to pack up and shift his businesses over to Europe. California was so locked down that he wasn’t able to actively work with his film/media business, and his parents both live in Europe, too. It just made sense for him. Nick has business contacts in several areas around the EU and had heard so many positive things about Sofia. After visiting Sofia for business, he fell in love with the lifestyle.

Of course, it made the distance in our fairly new long-distance relationship even farther. But we’ve made it work. He’s been traveling back and forth from Europe to Florida when he can (it’s been easier for EU citizens to travel), and as soon as Bulgaria opened its borders to Americans, I booked a flight to spend the summer with him in Sofia.

Sofia has a high quality of life and it’s very affordable for a big city. Nick knew from the beginning that we would rather establish a home base where we weren’t paying an arm and a leg for rent. A more affordable lifestyle equals experiencing more of Europe.

So, here we are in the capital of Bulgaria! It’s been a really fun journey finally getting to join him here.

Q: Are you renting an AirBnB or did you lease an apartment?

We signed a lease for an apartment in Sofia in June, so we’ll be using this apartment as our European home base for at least a year. Everything is much easier with Nick being a German citizen. If we were both only Americans, it would’ve been way trickier, which leads to the next question.

Q: How long are you going to be living in Sofia?

Like I said above, Sofia will be our European home base for at least a year. However, as an American, I’m allowed 90 days in the European Union, and then I have to leave for six months. I’ve never had to worry about this timeline before because my visits to the EU were only about two weeks at a time.

Now, the 90 days seem to be flying by and we’re working on the next part of closing the gap in our relationship, obtaining a visa for me. We’re not sure what all this looks like yet, so I’ll be traveling back to Florida before my 90 days are up. This gives us wiggle room for me to come back to the EU to finish up the visa process when needed.

Q: Is it hard living somewhere that you don’t know the language?

Yes and no. I feel so privileged that most of the modern world has made it a top priority to learn the Universal language of English. It’s the only language I’m fluent in, but I always try to learn the translation for “hello, goodbye, thank you, please, and red wine” in whatever country I’m visiting. It’s been a lot harder learning the Bulgarian language.

To start, their alphabet is totally different than ours. And when I greet someone with “Здравейте” (pronounced Zdraveĭte), they usually respond in Bulgarian and I have to then ask them to speak English. I’ve been pleasantly surprised that just about everyone has spoken enough English for me to get by.

We’ve also connected with a great group of friends here and a couple of them are Bulgarian natives. That makes life so much easier when we’re out and about with them!

Q: Are you able to work while you’re overseas?

Yes! Luckily, I can work from literally anywhere with my blog and other career ventures. I get a lot of financial questions but I’m not sure I’ll ever want to do a total breakdown of my monthly income unless it was to truly benefit other people. I will say that TWF is not my only stream of income, and my goal is to have at least 7 streams of income within the next year.

Q: What’s your favorite part about living in Sofia?

Other than just getting to be with the person I love, my favorite part is the ease of the lifestyle. Sofia is a big city with a bustling city center and delicious restaurants, but it also has huge parks with miles of running paths and cafes, Mt. Vitosha for mountain biking/hiking, and an overall energetic lifestyle.

The parks are my favorite. On any night of the week, we can stroll through South Park and see hundreds of people. Families, couples, grandparents, dogs, etc. all spend their free time enjoying the outdoors in the summer.

Sofia also has an international airport providing daily flights to other locations all over Europe. The flights are cheap and we can get to so many places within a 3-hour flight or less. Recently, we hopped on Google Flights, typed in Sofia to “Europe”, and found a cheap direct flight to Rome for the weekend! It makes Sofia the perfect starting point for dream destinations.

More than anything, I’ve learned that home really is wherever your heart is.

Q: What do you not like about living in Sofia?

You mean other than the vampires on every corner and ball lightning?! 😂

To be honest, there’s not much to not like, but I personally miss the beach/coastal living that I’m used to in Florida. If Sofia didn’t have the beauty of the mountains, it would be a lot harder for me. I love being outside so having a connection with nature is important.

We recently got a car here, but before that, we relied on the taxi system for most of our transportation. While it’s on an app similar to Uber, we would constantly wait for 20+ minutes for a taxi to show up or they’d reject the request altogether.

I also don’t like that I can’t buy Toasty Cheez-It’s here.

Well, considering my jeans are tight now, I guess you could say it’s pretty damn good.

I’m not a picky eater at all so I can eat in any country. I’d say my two favorite types of restaurants here in Sofia would be sushi and Italian. We have about eight different restaurants that are our “go-to’s” but it’s been fun trying new brunch spots on the weekends with friends or going to the city center for specialty restaurants. I even had foie gras (duck liver) my first weekend here! Overall, the food would be very familiar to any American that’s visiting Bulgaria.

Traditional dishes are always fun to try in new places. My favorites include mish-mash, banitsa with cheese, and mekitsa.

RELATED: THE YUMMIEST PLACES FOR BRUNCH IN SOFIA, BULGARIA

Q: Is it hard going from a long distance relationship to being with each other 24/7?

When we first started dating, we’d always have an adjustment period when we saw each other again. We’d both have major butterflies and it would take a couple of nights for us to remember our routine of being together in person again. This time around, we jumped right back into our routine with total ease. Our relationship has only gotten stronger through distance.

Q: What do you miss the most about America?

Other than my family and friends, I miss silly things like Target and Taco Bell. I miss hearing English conversations, the convenience of reading English signs, and the ease of calling a store/office and being able to easily communicate.

Other than that, the world is so connected through the internet and social media that I don’t “miss out” on things and I’m able to live my life very similar to the way I do in Florida.

Sofia should be on everyone’s list if they’re visiting Southeast Europe! Bulgaria is a beautiful country, in general, with seaside towns like Sunny Beach being the perfect coastal weekend getaway, too. We’ve also spent a little bit of time in Plovdiv, one of the most charming cities located less than 90 minutes from Sofia.

For us, it has everything we’re looking for in a city. We have the conveniences of a city when it comes to shopping, restaurants, transportation, and entertainment. And then we also have the beauty of the mountains, plenty of outdoor activities, and the great location within Europe!

As always, feel free to drop any questions you have about Bulgaria or the lifestyle here! I love being connected with you all and sharing my experiences.